This isn't my first novel by any means, but I think it's a special one for me and invite your attention.  Let me tell you about that.

BAILIN' is an adapted screenplay.  I've done a few of those to get more use out of scripts, which are even 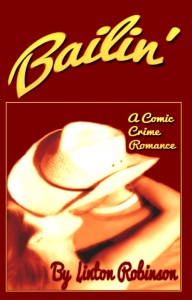 harder to sell than novels. I didn't do much with it for over a year, but when I picked it up to edit and format, I was delighted with the writing.  This is "crime lite", not gritty realism, but I love the way it came out, as rich and spunky as anything I've done.  This is a book--and I don't say this lightly because I'm a major fan--that I think fans of Donald Westlake would enjoy.

It's in Texas and Mexico, not New York, and instead of the rumpled Dortmunder it features lovebird robbers that could be played on screen by Brad Pitt and  Mila Kunis.  They were doing OK shooting up south Texas and making hair-raising getaways, but get in over their heads when they tie into real robbers--crooked politicians.  And a threatened nerd embezzler with six millions stashed, a grizzled bounty hunter, a body-conscious killer, two wild bikers with a rocket chopper.

If you like caper books with a fun touch--if you dig Bill Fitzhugh, Tim Dorsey, Lawrence Shames, Carl Hiaasen, Paul Levine, Christopher Moore, and the like--you might find BAILIN' a lot of fun.

I am hoping this is going to be a hot book, and invite you to have a look.