Trestle Press is proud to announce that author William Tooker will be starting a new monthly horror series entitled “Slouching Towards Bethlehem”. The first installment in series, “Bad Angels”, will be released August 12,2011. Here is the synopsis of the storyline and a bio on the author:

“Before the Dawn of Civilization an advanced culture named the Zep Tepi encountered a race of spirit beings called the Annunaki. The Zep Tepi were benevolent and were evolving past a need for their bodies to the point where they could choose to wear them or not. For a time the Zep Tepi and Annunaki were friends until the Annunaki revealed their true nature by attempting to take over a great carved city in the asteroid belt filled with Zep Tepi biological technology. The battle dislodged the asteroid city and crashed it into the western coast of North America trapping the Annunaki within the wreckage for thousands of years. In 1916 the great San Francisco earthquake created a sink hole over the spot where the asteroid crashed which was now part of a small boardwalk town named Veil, California. The sink hole was under a wealthy section of town that came to be known as "The Downs" and a few of the towns wealthy citizens found their way into the old asteroid city and fell under the sway of the still trapped but very much active Annunaki.

Where we pick up is where Ezzered Hill, former Mayor and now underground cult leader has been grooming a line of women with Zep Tepi genes for generations to facilitate the return of the Annunaki. An old silent film director Nigel Sahm has died and now exists only within the telepathic communications system of the Zep Tepi from where he can enter the dreams of anyone within the town and he uses this soley for his own pleasure and a private struggle for control of Veil with Ezzered Hill. The Hearken brothers were old world toy makers who did fall within the thrall of the Annunaki and use the technology of the spirit beings to bring about the actual return of the Annunaki where Hill only uses them for the power they grant him. The one thing all the players fear is that the Zep Tepi will return and bring a quick end to all of therse games and machinations. The only way to keep the Zep Tepi from wiping out all life to keep the Annunaki from gaining a foothold in the material world is the Deputy Daniel Waking Bear and a handfull of traumatized survivors of the horrors of Hill, the Hearken Brothers, Sahm, dangerous Zep Tepi technology and the terrors lurking in The Downs.”

About the author William Tooker:

Will is Writer and co-creator with Kevin Gentilcore for Creephouse Comics and also the writer for Matt Campbell’s Mythica Comics series. He is living in Columbus, Ohio and diligently working on horror with every keystroke.” 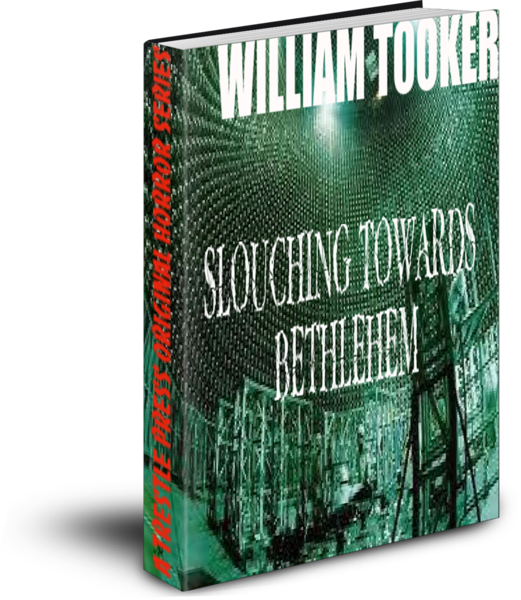