My fictional detective, DI Andy Horton, is based in the Solent  area and the Horton marine mystery crime novels include members of a fictional Hampshire Police Marine Unit - Sergeant Dai Elkins and PC Ripley who are nothing like the two police officers I introduced on Saturday from the team of the Hampshire Marine Police Unit at the Crime Writers' Association (CWA) Conference.

PCs Kerry Murray and Matt Gransden are younger and much better looking, although readers of the Horton novels might be aware that PC Ripley is only a little older than Matt. But the work my fictional marine unit are involved with in helping DI Horton of Portsmouth CID and Detective Superintendent Uckfield of the Major Crime Team isn't that far removed albeit fiction.

It was great to meet Kerry and Matt and to hear about their fascinating job. They gave me plenty of ideas not only for plots for future DI Horton crime novels but also for characters! Can't wait to get writing. It was a fantastic talk with lots of questions from the audience and I'm hugely grateful to Kerry and Matt for giving their time and to their boss for letting them especially when they are so busy. The Hampshire Police Marine Unit's area of responsibility stretches from Dorset to Sussex and out to 12 miles offshore.

I'm looking forward to meeting them again and spending the day with them on the Solent for further research for my crime novels. Must remember to pick a calm day though! 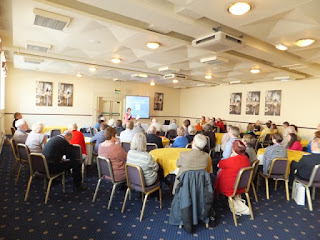 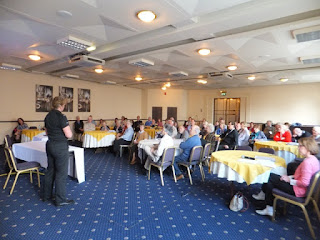 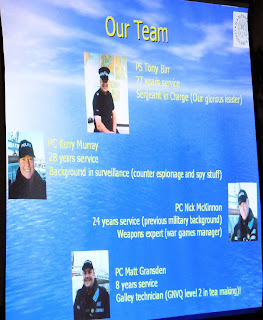 The unit consists of one Sergeant and nine PCs, policing with three semi displacement launches.