I was delighted to meet up with my publisher, Severn House at the London Book Fair. Below are some of the team from Severn House and me with Kate Lyall-Grant and the jacket cover of Death Lies Beneath which will be published in July 2012.

And I met up with my Chinese agent, Jessie Wang of  Chengdu Rightol Media who represents my novels in China and I'm thrilled to announce a six book translation deal.

Chinese publisher Nanhai Publishing Company of Haikou has bought translation rights to six novels in the DI Horton series . Nanhai will be publishing the Horton series in China over the next twelve months. Can't wait to see them. 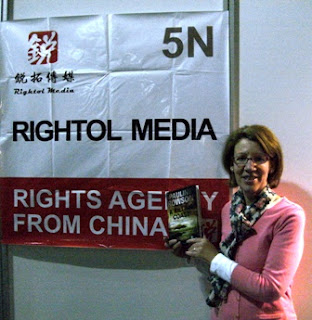 Death Lies Beneath, to be published in July 2012.

The DI Horton series is set in Portsmouth and the Isle of Wight against the backdrop of the Solent.