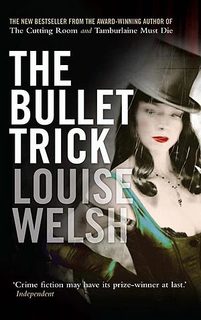 The Bullet Trick is Louise Welsh’s second novel, which deftly follows up on her first The Cutting Room . Like her first book, this is a story that shoots for the gothic and carnivalesque in a mystery setting, but this one doesn't quite hit the mark.
William Wilson is a magician on the last leg of a faltering career when an old friend asks him to do a second-rate show in a London strip club. What happens during the show drags Wilson into the violent aftermath of a dusty missing person’s case.

The story is set in three cities – Glasgow, London and Berlin – and Welsh effortlessly shifts between locations without losing the reader. Her depiction of these places and Wilson’s burlesque underground world is commendable, while the quirky showmen and grifters he meets along the way are appealing, if not memorable.

Louise Welsh’s writing is concise, and her style is playful in a way that makes the language itself alluring. In places the novel drags a bit, but the only real disappointment is William Wilson’s eventual show-down with the killer hunting him. One is left with a sense that the back story is far more powerful than William Wilson’s awakening as an unlikely hero. Taken as a whole, it’s a fine read to pass the time, but chances are you won’t remember the details a week from now.