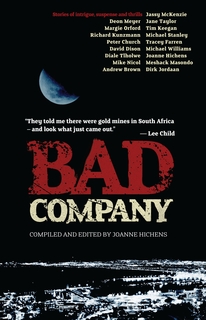 The publishers, Pan Macmillan, should be commended for sticking out their heads to get the project done, because hardly any of the big-name publishers will touch an anthology these days. Why? Because there’s no money it.

The project put me into a reflective mood about short stories in general. When a week after the launch I could still only find one or two reviews in major media, and I had to admit this is stunning coverage for an anthology, that mood became melancholic. Why, I thought, are short stories so shunned by the broader reading market, and hence publishers, who have to chase this bunch to break even?

One can easily comment, as many authors and publishers no doubt do, on how important short stories are to the industry. We can wax on in great self-righteous furore about how this form deserves more recognition, and how good writers first tested their mettle as short story writers before finding financial success. Or we can be even lamer and quote our high school teachers on the merits of the form: short stories are much loved because they are often highly experimental in nature; they depend on thoroughly inventive plots for their success; short stories are scalpels where novels are often crude cane machetes.

Nice, that. But it still don’t mean they sell.

Can we in the industry pull the blindfold from our eyes for a second, tear the short story from its pedestal, and talk honestly about the form? If short stories are boring – and a lot of them are – I’m not going to read them, okay? What do I care for a format where authors do dry-runs for later works of staggering genius? I’d rather buy the book when they’ve got their shit together, if you don’t mind. If an anthology costs me as much as a paperback and I’m likely to only enjoy ten percent of the stories, doesn’t that mean I’ve shafted myself? Plus, a short story hardly ever gives you the sense that you’ve been taken on an otherworldly trip, does it? So why buy them when its escapism I want?

One thing that draws me to short stories is precisely the fact that they’re such a niche product. You have to hunt for the best ones, even harder than you do for a great book, so when I find a great collection it makes me feel truly special. It’s like the editor has blessed me and only me with that bundle of treasures.

I find it sad that most publishers treat short story anthologies as a necessary evil, rather than the luxury good they really are. If I could have my way, I’d give back to short stories what they thoroughly deserve: luxury branding. Limited signed editions. Hardback. Hell, let’s go all the way and say gold embossed leather. Provided the collection is a good one, of course. People that read short stories are die hard fans, and the anthologies that are great become the stuff of legend. So why attempt a cheap mass market approach on a product that’s unattractive to the masses? Doesn’t make much sense to me.

I’ll take my favourite short story magazine as an example. The Third Alternative or Black Static as it is now called, was started in 1994 by TTA Press, run by the aloof but incredibly astute Andy Cox.

Instead of trying to punch out reams of short stories in a hit and run fashion, he set the bar incredibly high and only published short stories that were truly innovative. Wrapping these up in some amazing artwork printed on high quality glossy paper, and adding stellar reviews and commentary by the likes of Peter Tennant, Stephen Folk and more recently Christopher Fowler, the magazine quickly defined itself as a luxury item that’s worth owning. At a time when even the low-cost fanzines on the internet appear and disappear faster than mushrooms in a desert, this magazine has gone from strength to strength. Quality content + Quality marketing = Die hard fans.