Just as in CrimeFest 2010 this year’s CrimeFest was again a glorious hot day with wall-to-wall sunshine in Bristol.  Not the best time to be closeted inside the Royal Marriott Hotel but a very pleasant one to be strolling along the regenerated dock area and catching the little ferry across the narrow strip of water, which I managed to do. It was great to be back on the water, albeit for about two minutes, and I wondered whether DI Horton might take a trip into Bristol on his yacht one day. Or perhaps another character in a future thriller might be drawn to the area.

It was an early morning start for the panel on which I was appearing, beginning at 9a.m., but the audience seemed attentive enough and the authors were awake, which helped. And I noted that we didn’t send anyone to sleep.

I met my fellow crime writers; Mary Andrea Clarke, Frances Brody, Leigh Russell and our excellent moderator Adrian Magson in the Green Room, a dimly lit space in the basement of the hotel. It looked like a set from a murder mystery play. I half expected to trip over a dead body but there were none only very much alive authors. And here’s the photograph to prove it.

Our brief was to explore Genres and Sub Genres but as in most of these panels we ended up talking about many different aspects of crime writing and our crime novels. Frances Brody talked about her Kate Shackleton mysteries set in the 1920s, Mary Andrea Clarke about her historical crime novels set in the late 18th century and on the contemporary side there was Leigh Russell with her female detective Geraldine Steel and me with my hunky DI Andy Horton. Adrian Magson, as moderator, didn’t talk about his crime novels, except when introducing himself, but for the record he is a very accomplished and successful crime author having written many novels, articles and short stories.

Adrian asked us about our secondary characters, and if they would continue to feature in future novels. In my case he singled out DCI Lorraine Bliss, Andy Horton’s abrasive, alpha female, ambitious boss. I can’t say at this stage if she will continue to appear in the Horton novels but she appears in the new DI Horton, which is being released in July, called Death Lies Beneath, and she also features in the Horton novel I’m currently writing.

I was asked why I chose to create DCI Bliss. The reason is because she is completely the opposite of DI Horton and this therefore creates tension between them.  Horton is a maverick cop, who likes action, and doesn’t much care if he cuts corners or gets into trouble just as long as the villains are caught. While Bliss is a desk johnnie, intent on doing everything by the book and making sure that whatever  happens she comes out looking good with a couple of brownie points to boot, to help her in her climb to the top.

Adrian also asked me why I wrote from the male point of view, while the others on the panel had chosen to have a female protagonist.  It wasn’t until I created DI Horton, after writing several novels with a female lead that didn’t get published, that I realised writing from the male point of view was more natural and exciting for me.  I have also written two stand alone thrillers, In Cold Daylight and In for the Kill, both with male leads. I joked with the audience that maybe I’m a closet man!  But in reality perhaps it’s because I have spent most of my career working in male dominate organisations. 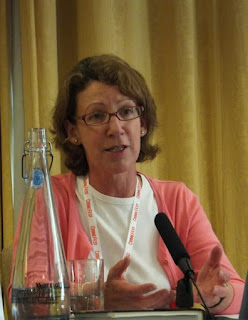 It was a relaxed but lively discussion with some good questions from the audience many of whom had travelled from as far as Canada and America. And it was expertly chaired by Adrian Magson who made sure that we all contributed equally to the discussion. 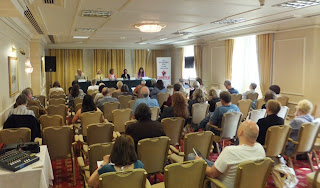 I met some lovely people after the panel and had a chance to chat to them about what they like about crime fiction: a puzzle to solve, great characters, atmospheric settings, action packed novels were some of the answers, which varied as much as the genre does itself, and that’s what’s so exciting and fascinating about both writing and reading crime fiction. There’s something for everyone.