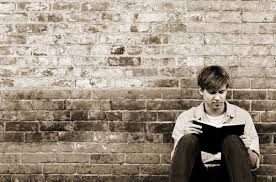 Some 80% of fiction readers are currently women and this didn’t used to be the case (see last week’s post, “Ten Reasons Why Men Must Start Reading Fiction Again”). I have lots of theories about why men have abandoned fiction, but I’ll bore you with those some other time. I just want to focus on the task at hand.

So, without further ado, I present to you the By No Means Finished Ultimate Cold Reading List of Fiction for Men, which I have compiled from Coldster suggestions that have come in right here on Cold, my blog on CrimeSpace, my email, over the phone, and even some that have been whispered in my ear at Christmas parties.

Because, yes, I’ve taken to harassing eggnog-drinking friends, neighbors, PTO members and fellow parishioners into putting in their two cents.

This is a diverse list of novels offered by writers (indie, traditional, non-fiction and fiction), literary agents, designers, housewives, an advice columnist, corporate rats, a USMC General, a real estate agent, and even a Pulitzer Prize winner. The only thing they all have in common is fiction, me and Cold.

And don’t worry – I’m not just trying to shove the same Jonathan Franzen fiction/reportage down your throats – although I believe he does get a mention here. I’m endeavoring to provide you with choices from the classics, the genres, the indies – everything from Shakespeare to Vampire Erotica. While there is some great literature here, this is not a list for literary purists or snobs. We want to have some fun with this.

What I did not do is take suggestions from authors plugging their own work – even if their work deserved a place here. Despite how democratic I wanted this process to be – and I’ve been very liberal – I had to draw the line somewhere. If you are in any way connected to me and made the list, it is because two or more independent sources threw your work into the mix.

Nor have I ordered the list in any particular way – it’s basically first come, first served – so don’t think Old Yeller is the top pick while London Boulevard should be the last book you take to the toilet with you (we are talking to men, aren’t we?). When the list is complete, more or less, I’ll choose an appropriate way of ordering the list.

This time, really, without further ado…

Get cracking, guys! This is a great place to start. And, please, keep the suggestions coming in.

I like that title, Eric. And I love bacon.

I think we need some new books written that really appeal to men's interests. For example, I've got an idea for a crime novel I think I'll call "The Bacon Thief."

What an effort, Victoria!  It's a great selection for men (and women).

Hi, Jed. Thanks for commenting.

I don't get it, Victortia.  If this is somehow going to get men who don't read fiction, to do so--I think it will have the opposite effect.

I've been reading a novel literally every day of my life as far back as I can remember but even to me this is a confusing mishmash.  Are there a small percentage of gems here?  There sure are.  But someone deciding to try fiction would probably throw their hands up in frustration looking at this list.  The guys that did try to read one, the odds are an easy 75% that they would be reinforced in their dislike of fiction for the rest of their lives by their choice.

Better a list with 5 of the best crime novels ever written.  This is a crime fiction site after all.

Comment by John McFetridge on December 30, 2013 at 1:57pm
Nice to see the Minister Faust on the list, I reviewed that book (quite positively) for the Toronto Star. Also nice to see Drop City and the Sportswriter.

But no Roddy Doyle?