The Devil's Road to Kathamandu on amazon worldwide 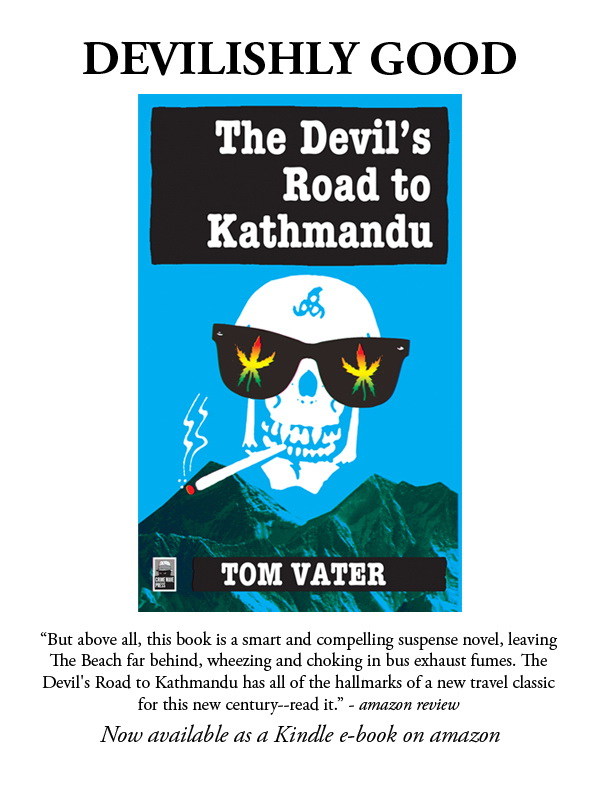 Kathmandu in the 70s -- that sounds fantastic.

As to the plot of The Devil's Road to Kathmandu: In 1976, four friends, Dan, Fred, Tim and Thierry, drive a bus along the hippy trail from London to Kathmandu. En Route in Pakistan, a drug deal goes badly wrong, yet the boys escape with their lives and the narcotics. Thousands of kilometers, numerous acid trips, accidents, nightclubs and a pair of beautiful Siamese twins later, as they finally reach the counter-culture capital of the world, Kathmandu, Fred disappears with the drug money.

A quarter century later, after receiving mysterious emails inviting them to pick up their share of the money, Dan, Tim and Thierry are back in Kathmandu. The Nepalese capital is not the blissful mountain backwater they remember. Soon a trail of kidnapping and murder leads across the Roof of the World. With the help of Dan’s backpacking son, a tattooed lady and a Buddhist angel, the ageing hippies try to solve a 25-year old mystery that leads them amongst Himalayan peaks for a dramatic showdown with their past.

The Devil's Road is available from amazon btw, at http://www.amazon.com/The-Devils-Road-Kathmandu-ebook/dp/B008E71INO...

This is a fantastic cover and it looks like an interesting book. What's it about?