Uluru, also known as Ayers Rock, is a huge sandstone formation in the southern part of the Northern Territory, not far from the geographical center of Australia. An island of rock jutting above (and below) the desert floor, this red iceberg is almost six miles around and over a thousand feet high. It’s dotted with springs, waterholes, caves, and petroglyphs, and has long been sacred to the Aboriginals. Popular as a campground, Uluru is protected within a national park.

On 17 August 1980, Michael and Lindy Chamberlain from the mining town of Mount Isa, Queensland, were camping with their three children, six-year-old Aidan, four-year-old Reagen, and the infant Azaria, born nine weeks previously. At eight o’clock that evening, the two youngest were sleeping in the family tent, exhausted from exploring all day. The young couple and Aidan were a few yards away, supper on the barbie.

There was a sudden cry from the tent. Lindy ran for her children. She claimed she saw a dingo, a wild dog, crawling backward out of the tent. The dingo shook its head, as if it carried something in its mouth, something struggling. Then it ran into the night and vanished.

Inside the tent, Lindy found Reagen still sleeping. But Azaria’s bassinette had been tipped over. Dark liquid was sprayed over one tent wall, near the ground. The infant was gone.

“The dingo has got my baby!” Lindy screamed.

Every camper at the site scrambled for the search and the park rangers joined in. Many reported having seen dingoes near the campsite during the day, and some remarked on the dingo tracks around the Chamberlains’ tent. Although the search lasted all night, no trace of the baby was found. The family returned home to Mount Isa and its mines to grieve. 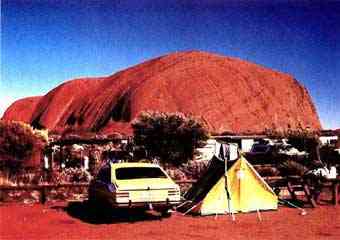 It’s an ugly tragedy, but at this point it took an even uglier twist. Eight days later, Michael and Lindsay were watching the evening news when the reporter announced a pile of baby clothing had been found two and a half miles from the Uluru campsite. It was Azaria’s—jumpsuit, undershirt, bootees, all torn, bloody, and dirty. Missing was her short coat edged with lemon yellow, called a matinee jacket. The local policeman, holding the items in his bare hands and displaying them for the camera, stated they’d been “neatly folded” when found.

The ominous insinuation wasn’t lost on the press nor the general public and overnight, Lindy Chamberlain was branded a baby-killing monster. It was soon widely claimed that a wild dog couldn’t possibly have carried off a ten-pound infant. The rumor mill took an even more grotesque turn when it surfaced the family was deeply religious and Michael a Seventh-Day Adventist pastor. Discussions of cult sacrifices and dingoes made of thin air were given some credence by the public if not the press.

The police had their own questions. The infant clothing was torn and bloody; but was it bloody enough to support the claim of an animal attack? Wouldn’t the clothing have been ripped to shreds? Where was the little jacket, if it existed anywhere except in Lindy’s story? And why hadn’t any bones or remains been found with the clothing?

The press outcry and public cynicism weren’t helped by Lindy’s personality. Strong and somewhat abrasive, she refused to cry on camera nor behave as a grieving mother was expected to. Public sentiment solidified against the family with Lindy the crux of the storm.

The inquest for Azaria was held 15 December 1980. From the first, it demonstrated a police mismanagement fiasco of embarrassing proportions. No photographs had been taken of the bloodstained tent, even though it had been impounded at the time, and the dingo tracks had been thoroughly scuffled underfoot during the frantic search for the baby. By handling the clothing with bare hands, the police had tainted any possible forensic clues or destroyed them entirely.

The only evidence presented by the police was an opinion registered by Dr. Kenneth Brown, a forensic odontologist, that the holes in Azaria’s clothing hadn’t been made by canine teeth but by something sharper, such as scissors or a knife. He’d reached this conclusion by wrapping chunks of meat in a baby’s jumpsuit and tossing it into the dingo cage at the Adelaide Zoo, then examining what was left. The marks left on the test jumpsuits were poorly defined, not sharp and clear as were those on the suit Azaria had worn.

Against this and the public opinion, experts testified that a full-grown dingo could tote a twenty-five pound wallaby, and so a ten-pound infant was no stretch. As well, dingoes tend to eat all of a kill, even the bones, the skin and fur of animals and the feathers of birds, leaving nothing to be found. And even though no dingo attacks on humans had been previously recorded, nor was there any documentation there hadn’t been any.

The coroner, Denis Barritt, was having none of it. In a televised verdict, a rare occurrence, he called the criminal case no more than “months of innuendoes” and a national disgrace. Azaria’s disappearance and presumed death were attributed to the dingoes and the case was closed.

Except that it wasn’t.