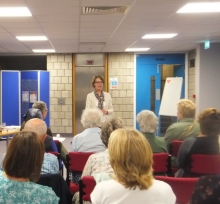 Worthing is a seaside town and the largest in the county of West Sussex. It nestles at the foot of the beautiful South Downs, and is ten miles west of Brighton, and eighteen miles east of the cathedral city of Chichester. It’s not mentioned in my crime novels, whereas both Chichester and Brighton are but I think I’ll have to rectify that after hearing about its diverse population from some members of the audience.

It also boasts that Oscar Wilde and Harold Pinter both at one time lived and worked in the town so I was in good company.

It was a pleasure to entertain the small but perfectly formed audience at Worthing Library on Saturday with tales of criminality. It was the second talk I’ve given there, the first was very soon after my second DI Andy Horton novel had been published in 2008, Deadly Waters, and now there are eleven in the DI Andy Horton crime series, and two standalone crime novels. According to Wikipedia "the area around Worthing has been populated for at least 6,000 years and contains Britain's greatest concentration of Stone Age flint mines, which are some of the earliest mines in Europe. For many centuries Worthing was a small mackerel fishing hamlet until in the late 18th century it developed into an elegant Georgian seaside resort and attracted the well-known and wealthy of the day."

After the talk I read an extract from The Suffocating Sea (DI Andy Horton 3) then took a lively Q & A session which was followed by a book signing and the chance to talk to members of the audience. 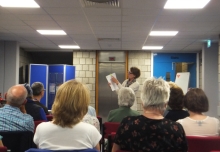 My thanks to all for coming along to hear my talk and to the lovely staff at Worthing Library for asking me to speak and for hosting the event.