Whose story is it? That is a question every writer needs to ask him or herself before starting to write a novel, or if not then certainly while writing and revising it. From whose viewpoint are you telling the story? Is it single viewpoint or multiple viewpoint? Is it male or female or a mixture of both? Beware the latter though and having too many viewpoints because that will not only muddle the story and slow it down but it will also confuse you, and more importantly the reader.

The purpose of the crime or thriller novel is to excite and intrigue, sometimes also to scare, therefore having too many viewpoints, i.e. switching to different characters every so many pages or chapters can bog down a crime novel. 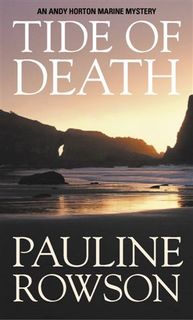 When I first started writing I wrote from the female character's point of view but as I began to write more I found myself far more attracted to telling the story from the male character's point of view and when I created my hunky detective, DI Andy Horton,in the first of the Horton series, Tide of Death, I knew that I had found my 'voice' as they say in writing parlance.

Once I started writing from the male point of view everything began to fall into place. I also prefer single person point of view which means that you follow the story through the eyes of DI Andy Horton in my mystery crime novels, which are written in the third person, and through Adam Greene in my thriller, In Cold Daylight and Alex Albury in In For The Kill which are both written in the first person. Although this has its drawbacks in that you can not explain others inner emotions you can portray them through the lead character and it also makes for tighter writing and therefore a faster read.

Why the male point of view?

When people ask me why I write from the male point of view I often joke that maybe it's because I am a closet man. But I don't really know and I don't think it matters, it's just the way I find comfortable writing.

There are of course some very strong females in my novels such as the pathologist Dr Gaye Clayton in the DI Andy Horton series.There are also female victims and killers and there is, from DI Andy Horton number three onwards ( The Suffocating Sea), Horton's acerbic boss, alpha female DCI Lorraine Bliss.

Finding your style and your voice takes time and practice but if you enjoy writing then that's not a chore, on the contrary it's always a pleasure to experiment.