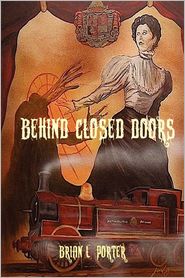 My latest release Behind Closed Doors is now available from Barnes And Noble with a fantastc 28% introductory discount, meaning you can get the paperback edition for a mere $12.23.

This way, you can save money on the book and the publishers will still doante $1 from every copy sold to The Mayflower Animal Sanctuary. Please help the book to succeed as the sanctuary does such wonderful work and being a charity they rely totally on fund raising and donations, so this is my way of trying to help them while at the same time, giving people the opportunity to read what I hop you will find an enjoyable and thrilling mystery.

Of course the book is still available from Amazon.com, Amazon.co.uk and from the publisher, Sonar 4 Publications.

Autumn, 1888. The population of London is transfixed and horrified by the atrocious and horrific murder spree being conducted by Jack the Ripper. The newspapers are full of the details of the mutilations perpetrated by the killer and the apparent inability of the police to apprehend the unknown assailant. As Metropolitan Police Commissioner,Sir Charles Warren throws the bulk of his investigative resources into the search for The Ripper, and the tabloid press scream of the crimes in banner headlines on a daily basis; on the new, ultra modern Underground Railway that has revolutionized travel around the great metropolis for the working man, another, less well publicized killer is at large.

Each paperback copy of Behind Closed Doors sold carries a $1 donation from the publisher to The Mayflower Animal Sanctuary in South Yorkshire, UK.