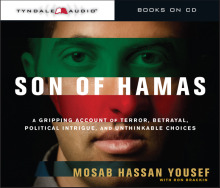 How the son of a Hamas founder ended up an Israeli agent, as told by the "Green Prince" himself. (I posted this on GlobalPost)
RAMALLAH, West Bank — Parents often lament that their kids don’t follow them into their chosen professions. They ought to think themselves lucky. They could be Sheikh Hassan Youssef, a founder of the Islamic militant group Hamas whose son converted to Christianity and became a key Israeli agent.
Mosab Hassan Youssef, 32, reveals his secret life in a book to be published next week “Son of Hamas: A Gripping Account of Terror, Betrayal, Political Intrigue, and Unthinkable Choices” (Salt River Press).
Earlier this week on his Facebook fan page, Youssef announced that he’d given an interview with the liberal Israeli newspaper Ha’aretz about the book. “The story will blow your minds away, it is going to be like a tsunami in the Middle East, couple of days later it will spread like a wild fire,” he wrote.
The tsunami was that Youssef’s previous account of his struggles — that he had turned against the violent ways of Hamas and, consequently, rejected Islam as a religion of hatred and violence — wasn’t the whole story. In fact, Youssef had been an agent for the Israeli Shin Bet domestic security service during the intifada, informing on the very organization of which his father, Sheikh Hassan, was a prominent leader.
His actions earned Youssef the codename “Green Prince” from the Shin Bet, a reference to the Islamic green of Hamas’s flags.
The account in Ha’aretz was verified by Gideon Ezra, an Israeli legislator who’s a former deputy chief of the Shin Bet.
Youssef’s father was a founder of Hamas and is currently serving a six-year sentence in an Israeli jail. The younger Youssef has said that he turned against Hamas when he realized that his father, who’s seen as a relative moderate, didn’t represent the heart of the organization. Youssef saw that core as rotten with a self-destructive hatred that brought down disaster on the Palestinian people.
Sheikh Youssef’s reputation as a moderate, of course, doesn’t preclude him giving fiery speeches about the victory of Islam in battle — which I witnessed several times at his mosque in al-Bireh, a city abutting Ramallah.
The sheikh’s broad white mosque with its plain carpeted floors is a long way from the Barabbas Road Church in San Diego, Calif., where Mosab Youssef now worships.
In 2005, the last time I saw Sheikh Hassan during the intifada, he claimed that as a representative of Hamas he was in contact with U.S. diplomats via a European intermediary. “And I know that what I tell the Americans they will tell Israel,” he said, “so, yes, I’m talking to the Israelis.”
In Hamas, that makes him pretty moderate.
The following week, Sheikh Hassan was arrested by the Shin Bet (with the aid of his son, it turns out).
In prison, according to Mosab Youssef, his father was devastated by the news that his son had become a Christian. The sheikh refused to disown his son, however, because that would imply consent to the boy’s murder.
Former Shin Bet deputy chief Ezra said Mosab Youssef was recruited as an agent while being held in an Israeli jail. Ezra, like several anonymous Shin Bet sources quoted by Ha’aretz, said Youssef’s information helped prevented numerous suicide bombings and saved many Israeli lives.
Most Palestinian informers — or collaborators, as Palestinians call them — are recruited either in jail or when they visit Israeli military bases to obtain travel permits. The collaboration begins with something small and apparently harmless, in return for permission to travel through army checkpoints for medical treatment in Jerusalem, say. By the time the Palestinian realizes he’s a fully fledged collaborator, the Shin Bet are able to control him by the threat of exposure.
In Mosab Youssef’s case, no such threats were needed, it seems. In the Ha’aretz interview, he expresses a desire to be in Gaza so that he could secure the release of Gilad Shalit, the Israeli soldier held hostage there, and end the suffering of Gaza’s people under the Hamas regime.
A Hamas leader, Ismail Radwan, denounced the report as an attempt to undermine Sheikh Youssef’s standing. "The Palestinian people have great confidence in Hamas and its struggle and they will not be fooled by this slander and these lies of the Israeli occupation," he said.