I’ve always enjoyed Elmore Leonard’s novels and seen him as one of the true stylists of popular fiction. In a review, I even described my pal Christopher G. Moore as the “Elmore Leonard of Bangkok” and I meant it as a compliment. But I have a bone to pick with the great Elmore.

I just read a book of Elmore’s short stories from 2004 titled “When the Women Come Out to Dance.” In many ways it’s superb. The title story turns on the particularly American kind of hardness and determination that takes a character who is not bad into a situation that leaves them ineradicably among bad people.

So what’s the problem? Movie stars, that's what.

In one of the early stories in the book, a character is described as being a “Jill St. John type.” I looked her up. She doesn’t appear to have had a major movie role for about 28 years before Elmore wrote the story, but I suppose her bikini-clad appearance in an ancient Bond film made an impression on him.

In two – not one, but two – of the later stories in the book, there’s a character who’s described as looking like (or smiling like) Jack Nicholson.

This isn’t the work of a great stylist. This is on the level of Dan Brown. (Remember that in The Da Vinci Code, Brown’s hero, the dumbest professor Harvard ever employed, is described thus: “He looked like Harrison Ford.” I wonder if, after the movie came out, later editions updated that to “…He looked like Tom Hanks.”)

This would be a cheap technique if a journalist used it. For a writer with the descriptive powers of Elmore, it’s a real shame.

In his famous 10 Rules of Writing, Elmore says: “Avoid detailed descriptions of characters.” That’s probably why he didn’t write “He looked like Jack Nicholson in ‘The Shining’ in the scene where he’s coming through the door with the axe and shouting ‘Here’s Johnny’ with a demented enjoyment on his face.” Too much detail. 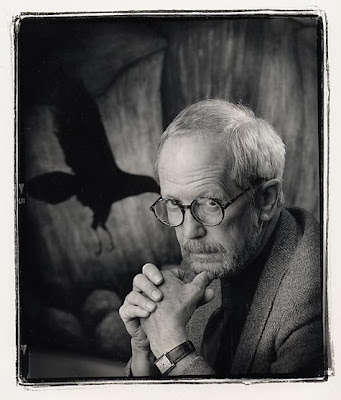 Well, if you were trying to describe Elmore, how would you do it? Here’s his picture. I could describe him as “looking like Roger Whittaker.” Mean anything to you? Perhaps you don’t recall much about British easy-listening music of the 1970s. If you did, you’d have a picture. But why should you?

That’s exactly why I don’t like to see Elmore describe a character as looking like a particular movie star.

That doesn’t mean Elmore’s style should be discounted. (Read his 10 rules below. They’re very good in a folksy American sort of way.) But let’s first add an 11th rule: Don’t describe characters as looking like a particular movie star.

Comment by Jack Getze on July 16, 2009 at 7:51am
Be Cool and Get Shorty both start with the character, Chili Palmer, telling you what's up. Third person POV. You won't find the author in either one of those books.

Comment by John McFetridge on July 16, 2009 at 5:05am
Yeah, I'm a big fan of Raymond Carver. I'm going through a whole short story binge these days.

Comment by I. J. Parker on July 16, 2009 at 4:46am
I absolutely follow the Lourdes example. It's clearly a character's pov. But I'm not at all sure about the "They" beginnings. That may well be the author as narrator -- unless a later passage introduces the observer as someone other than the author.

Comment by John Dishon on July 16, 2009 at 3:35am
Get Shorty and Be Cool both open up with a narrator. Be Cool even starts with "They", as if the narrator is on the other side of the street pointing at the characters.

The Jill St. John part is also narrated. Here is the paragraph with that description:

Mrs. Manhood, with her wealth, her beauty products, looked no more thirty. Her red hair was short and reminded Lourdes of the actress who used to be on TV at home, Jill St. John, with the same pale skin.

Unless Lourdes, is referring to herself in third person, that's a narrator. Also, I noticed he being 4 of those 9 stories with "They".

Comment by Jack Getze on July 16, 2009 at 2:38am
I have to go back and look now, but I was under the same impression as John -- i.e., that Elmore never narrates as an author. It's his biggest, guiding rule -- an invisible author.

The other thing John's right about -- I have to shut up about Elmore until August.

Comment by John McFetridge on July 16, 2009 at 1:55am
There is no narrator in Elmore Leonard novels - everything is from a character's pov. It's one of the things you can see develop over his books, his refining of that removal of the narrator. Cool stuff.

Comment by Matt Rees on July 16, 2009 at 1:45am
Jack, that'd be fine. But in these stories, the descriptions of characters as looking like a particular movie star are by the narrator. That's quite different.

Comment by B.R.Stateham on July 16, 2009 at 1:25am
Rules, my friend, are made for two things: One; they're made to give a set of broad-spectrum guidelines. They're like a GPS system of navigation for a writer. They point you in a certain direction.

Two; rules are made to be broken. If you religiously follow rules you fail to develop a writing style you can call your own. So everyone, sooner or later, breaks rules here and there.