Everyone knows that fingerprints are unique but what about footprints? I came across this article while researching for my current DI Horton crime novel,number eight in the series, wish I'd had it for Footsteps on the Shore, the sixth DI Horton .OK, so I know Sherlock Holmes was at it many moons ago but here below are the recent research findings which you might find interesting.

"It seems that footsteps are as unique as fingerprints, and can identify people with 99.8 per cent accuracy.

"For the first time, our results show that it probably is possible to use this in a real-world security application," says Todd Pataky of Shinshu University in Nagano, Japan.
Earlier studies suggested that everyone walks in a unique way that can be captured on film or by pressure sensors. But these studies tended to look at only 10 people each, making it difficult to tell how well the methods would work in the real world. So Pataky and colleagues asked 104 people to walk across a half-metre-long board studded with thousands of pressure sensors, recording ten steps per person. The sensors recorded how each foot applied pressure to the ground, and how that pressure distribution changed as the person walked.
The information collected was then input into a computer and used to train an algorithm to pick out the patterns in people's steps. Of the 1040 steps recorded, the algorithm wrongly identified only three – a 99.8 per cent success rate.
"Even if they have the same foot size, even if they have the same shape, [people] load their feet differently, and they do it consistently," Pataky says. Similar sensors, which are available commercially for about $20,000, could be used in airports to identify passengers as they walk barefoot through security.
Christopher Nester of the University of Salford in the UK thinks the technique could be used as a diagnostic tool for foot diseases and orthotics. As for security applications, he sees another, perhaps overlooked, drawback. "Nobody minds putting their fingertip on a glass surface, which is clean," he says. "But we very rarely wash our feet."
Speak for yourself!!
Journal of the Royal Society Interface, DOI: 10.1098/rsif.2011.0430 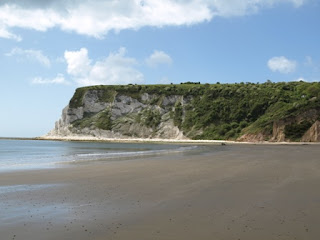 The analysis of footprints left in sand, soil, or another soft material might prove to be a useful forensic science technique and I might just weave it in to a future crime novel.