The modern-day obsession with gory forensics and series such as CSI and the UK's Silent Witness is filtered into a late-Victorian makeover for Murdoch Mysteries. The setting is Toronto and William Murdoch, played by Yannick Bisson, is a pioneer in the then new detective sciences, but apart from these features this routine police procedural breaks little new ground.

In fact, it's so familiar as the type of standard crime show and TV movie mystery you see on Sunday afternoons that, if the lab scenes were toned down a bit, it could have been made any time in the last 40 years. But if you like decent, gentle costume mysteries, then this is a fair cop.

What's new at the start of series four is that Murdoch's love interest, pathologist Dr Julia Ogden (Hélène Joy), has cleared off to Buffalo and a new job. 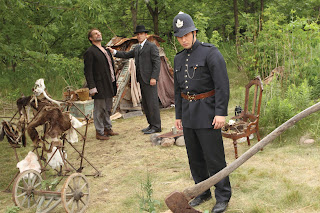 In spectacularly brusque recap, she tells puppy-dog faced Murdoch, 'It's clear to me how much you want a family. But my abortion left me sterile.' How about that for getting to the point. She's on the train before gormless Murdoch can summon the words, Don't go. However, my crystal ball (aka the Alibi website) tells me she will crop up again during this series.

Anyway, there's no lady action for the detective as the first grisly case of the series comes Murdoch's way, that of a body hacked to pieces, set in concrete and left by the Don River. Instead, Murdoch has a new male colleague to rub along with – the ill-tempered Dr Francis (Paul Rhys, seen recently in the BBC's Luther), newly arrived from Scotland Yard.

The new coroner insists the body parts are from one victim. Murdoch secretly sends Dr Ogden some of the evidence, and she says there are three victims and most likely one killer. The victims turn out to be an unknown man with gout, a syphilitic ex-con, and Duncan Burnside, Toronto's citizen of the year. So, Murdoch must work out what connects them. 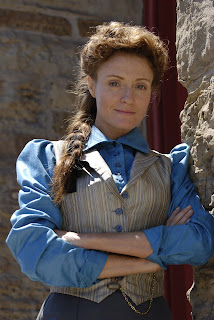 Yannick Bisson
Some familiar faces from UK television will appear during this series in addition to Paul Rhys, including Lisa Faulkner (New Street Law) and Simon Williams (Upstairs Downstairs).

It's a shame that Yannick Bisson as Murdoch is such a blank page, who – à la Roger Moore – tends to express himself with one eyebrow. When you're acted off the screen by a former Coronation Street regular (another Brit, Thomas Craig, as Murdoch's boss, Insp Brackenreid), then you know a bit more effort is needed.