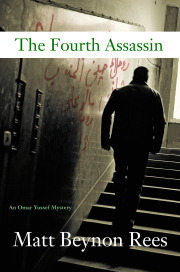 If you’ve been wondering why the people of Tunisia and Egypt have risen up against their dictators and why it caught Washington with pants down, it’s because you didn’t read THE FOURTH ASSASSIN, the latest of my Palestinian crime novels.
In THE FOURTH ASSASSIN, which was published exactly a year ago, my Palestinian sleuth Omar Yussef travels to New York for a conference at the UN. While there, he uncovers an assassination plot. But he also has to address the conference about the life of ordinary Palestinians —— and the people of other Arab countries.
Here’s a passage from that chapter of the book, with Omar addressing the delegates from Arab countries and the Americans:
“ ‘It may be hard for you to understand, but what ordinary Palestinians want and what they battle for every day is precisely what’s denied to most of your citizens in the Arab countries: freedom and economic prosperity.’
The Libyan delegate removed his finger from his nose and flicked it angrily. The Syrian strode down from the rear of the hall, dropping his
cigarette. The Lebanese stepped out the butt on the carpet as he followed.
‘How can you, the Arab countries, dictate a solution for the Palestinians, when you suffer from many of the same problems? In fact, you, the governing class, thrive on the lack of democracy, the inequality of wealth. Take away the Israeli occupation and the Palestinians would be closer to freedom and a functioning economy than most of your peoples.’
‘Shame, shame on you,’ the Syrian called out.
One of the Egyptian delegates stood and yelled, ‘Collaborator.’ His colleague hauled him back into his seat with a simpering glance at the Americans.