I had the pleasure of meeting a fellow author on facebook named Mosi T. Wells. He is a pleasure to talk to. I asked him if I could do an Author Spotlight on him and his first novel, Solitaire Mongoose. He was happy to oblige.

So without further ado, let’s proceed. This is a brief explanation and excerpt from the book….

In this chapter agent wells seeks cover in the autobody shop of a secondary school that is closed for labor day. He shoots it out with his pursuers and begins to question on Acosta at gunpoint. My novel is a fiction novel but truth lies within fiction and if a person takes the time to read this action-packed suspense thriller they might be able to find that buried treasure that lies within its pages. My novel’s plot, story, and characters are politically, socially, economically, and religiously based off of what we are experiencing in the 21st century as my themes revisit the 1940’s and 30’s as we experience these times in the commencement of a new millenium and century.

Mosi stuffed the gun in his waist, grabbed the snatch bar and got in position. Mosi had to knock him unconscious with the first blow. The man opened the door slowly with gun in hand. When the man entered the office and came within reach Mosi held the snatch bar in one hand and swung with all his might striking the man in the slope of his head. As blood exploded from the man’s head he was dazed and weakened. Mosi jumped down finishing him with a right cross to his chin. He spun around in a drunken stupor, sending him to the floor unconscious. He went through his pockets and found a large wad of money. He took the money and the gun. He found several zip ties and bound the man’s hands and feet and quietly exited the office. He ducked low and ran across the walk. The two men spotted him and began to shoot. Mosi dove, sliding for cover as the gunshots flew past him, and bullets ricochet. He was pinned down under gunfire. He fired back but could not get a clear shot at his pursuers. He noticed one man was hiding next to an 83 Ford Crown Victoria with a motor raised high above it on a crane with chain. He zoomed in on the weak link. It was the third link from the top. He had to wait for the precise moment. He took the .45 automatic that he got from the man bound in the instructor’s office. The large, heavyset dark haired man moved slowly around the car, he was right under the large V8 motor. Mosi had the .45 aimed, the link in sight. He fired several rounds in succession. The chain was broke, the motor fell and came crashing down hard on the man. He screamed in pain. The man in the cowboy hat went to his rescue this bought Mosi some free time. He went down the steps. The man under the motor was out cold bleeding badly, he wouldn’t make it. Mosi made his way down to the man in the cowboy hat. He took cover and fired shots to force him out from behind the car. The big man came out from behind his cover firing shots. The man in the cowboy hat had a black Magnum .357. He ran out of ammo. When Mosi heard the gun click he said, “Put your hands up in the air and slowly come out from behind the car.”

The tall man in the cowboy hat emerged. First hands then the rest of him. He walked slowly out from behind the car out into the open as Mosi aimed the glock, chest high, with his right hand steadying the trigger and his left
hand holding it steady. The large man had age in his face. He was rough, firmly built.

“Who are you working for?” asked Mosi in a firm but suttle tone.

“You’re not going to shoot me are you Mijo?” said the man in the cowboy hat as the creases in his brown face showed as he cracked a cynical smile.

“I will kill you if you take another step.” The man took another step forward; Mosi squeezed off a round and hit him in his left thigh causing the big man to drop down to one knee. Mosi moved forward aiming the gun point
blank at his head.

“Bitch ass muthaphucka! You know too much”, said the big man as he grimaced in pain.

“Why is Fuentes got you trying to kill me?” asked Mosi in a very serious tone.

“You are a coward just like the whore mijo. I tell you nothing.” Mosi fired off a round from his glock a shell casing hit the ground. The big man’s hat flew off his head. He lay flat on his back with his right leg back as if he were stretching. Mosi got on the cell phone to Thomas and began going through the big man’s pockets.

I hope you enjoyed this brief excerpt from Mosi’s book. You can buy Solitaire Mongoose on Amazon or Red Lead Bookstore. 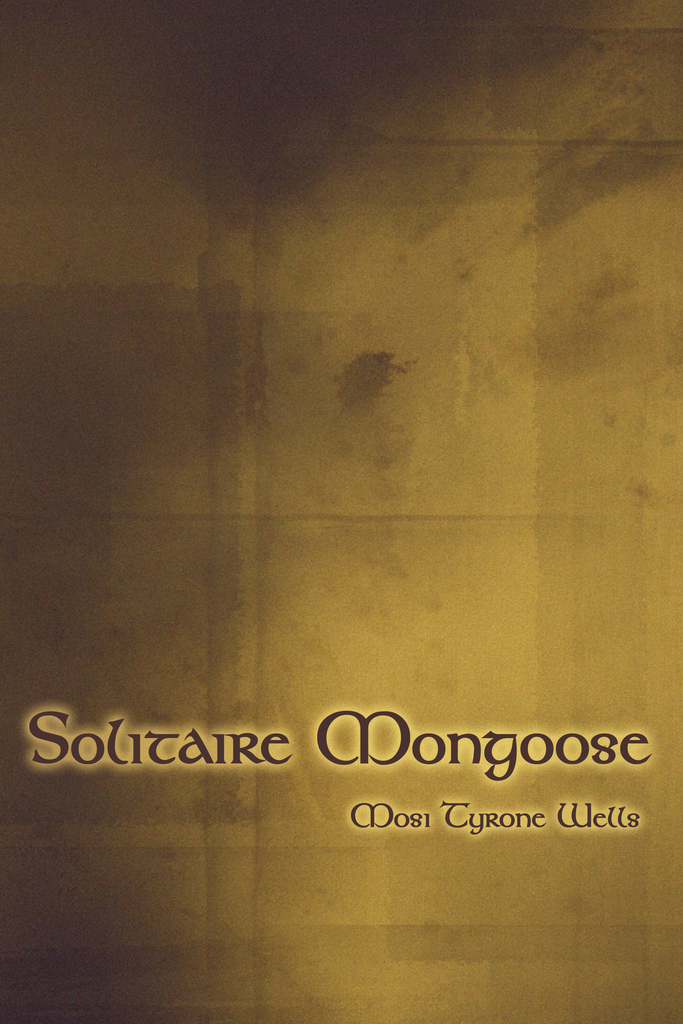