THE FIRES OF THE GODS is now also on Kindle: 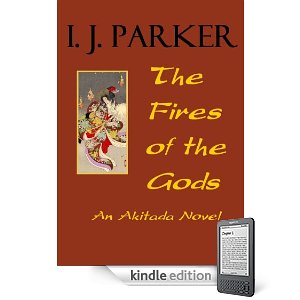 We delayed a little on this to give the hardcover some time to sell, but I'm happy to say that my most recent novel (an April 2011 release) is now also available at the very modest price of $ 4.99.

The hope is, of course,  that Kindle sales will bring me new readers.  I have always believed that Kindle book purchases are made by a slightly different person from the traditional book buyers.  True, THE FIRES OF THE GODS is at the end of the series as it stands, but many readers start anywhere in a series and then go back for the rest.  I have watched Amazon sales and found that books sell in batches.  Someone will buy 3 or 4 of them together.  That would happen when people suddenly get hooked on a series.

In FoG, Akitada is accused of murdering the man who is responsible for ending his career.  He is suddenly a private agent again, trying to clear himself and also to earn some money to support his family.  He is about to become a father again.

The cover image is my own design.