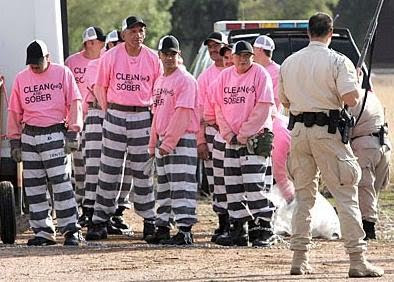 Sheriff Joe Apraio has been a police officer and DEA agent. He is currently serving his 5th term as Sheriff for Maricopa County. He became controversial back in 1993 for being tough on prison inmates, immigration laws, and drug enforcement as a deterrent against crime.

He’s known for the implementation of new jail operations, such as meals twice daily, classical music, banned sexually explicit magazines, and only showing television stations for C-SPAN and Disney.

Most controversial is the setup and extension of the jail with tents where there is no air conditioning for the 100+ degree summer heat in Arizona, which lowered the cost to house inmates.

He’s been quoted as saying, "It's 120 degrees in Iraq and the soldiers are living in tents, have to wear full body armor, and they didn't commit any crimes, so shut your mouths."

Perhaps his most well known tactic is the pink underwear that is standard for the inmates because it’s psychologically calming and keeps security in check. It also includes pink handcuffs.

Crime is something that won’t go away and prison overpopulation is a serious problem that needs to be addressed in more constructive ways. I find that Sheriff Apraio is indeed committed to deterring crime and solving problems in his jurisdiction. As I don’t agree with absolutely everything he has implemented, I have to admit he seems to be effective, and innovative if nothing else. It’s refreshing to see someone willing to stand up and make a difference. Many law enforcement officials could take a page from Sheriff Apraio’s book.

I had a thought… I wonder if Sheriff Apraio would agree with my heroine Emily Stone and her tactics on anonymously hunting down pedophiles and serial killers?

I would love to hear your comments about Sheriff Apraio and his law enforcement tactics and deterrents against crime. Do you think they’re effective or not? Would other states benefit from his example?

Comment by Jennifer Chase on November 4, 2009 at 3:13am
Hello all,
Thanks for all the great comments about this post! As discussed previously, there isn't any easy fix for the prisons, and crime for that matter. I felt that Sheriff Apraio is applying what he thinks is the answer to his jails and sticking with it. I don't have the numbers if his efforts really lowers the recidivism rates. That would be an interesting fact and I will try to see what I can find out. However, I would like to see more innovative and applied ideas instead of a lot of talk about the limitations of the prison system. It's such a complicated issue, but well worth discussions.
Thank you John and Dan for your views :)

Comment by John McFetridge on November 2, 2009 at 6:51am
My experience is from the other side of the law. Public safety and recidivism seems to be tied together pretty closely. I realize it's a generalization todividde up such a large group of people into thirds, but the question here is, 'does the experience the inmates go through affect which if these groups they leave in?' People may come in as members of the first third and leave as members of the third thid.

I've had experiences with people who served time - in most cases there was a point at which the punishment was very effective- they'd touched that hot stove and they never would again. But that's not the point at which they were released and that feeling wore off over the next few years and by the time they did get out they weren't so worried about the hot stove anymore (if I haven't mangled that metaphor too much).

It's a tough call. I don't think as a society we've really even decided what we think prison is for, so hard to say who's doing a good job.

Comment by John McFetridge on November 2, 2009 at 6:23am
Are his recidivism rates better than other prisons?