What a swell party- thanks BBC! 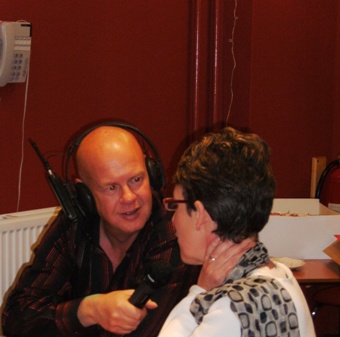 This morning, long before the sun rise, I travelled to the BBC studios in Southampton for the Radio Solent Christmas Breakfast Party to celebrate BBC Radio Solent's 100 Lives Project.
BBC Radio Solent's 100 Lives project offers a snapshot of life in the 21st century by following the lives of 100 people over the year. I was chosen as one of the 100 Lives because I live in the Solent area and my marine mystery crime novels featuring Inspector Horton and my thrillers are set in this area.

So I thought I'd share some photographs from the occasion with you. They're on my image gallery if you want to take a look.

In the audience were amazing people, some who had overcome cancer, some who had fascinating jobs, others who had raised huge sums of money for charity and someone who had had a sex change. I didn't get to speak to her which was a shame as I would love to have asked her some probing questions.

It was great fun and well worth getting up at 5.30am for. The canteen ladies were fantastic offering gallons of coffee, and tons of croissants, danish pastries and mince pies.

Julian Clegg broadcast the entire show from the canteen from 6.30am to 9.30am. The timing was immaculate, thanks to Talia and Lewis (he's the one holding the large clock) so that Julian could speak to everyone on air.

After the show photographs were taken outside the BBC studios.


Thank you Julian for a great morning. Thanks also to Talia with the clip board who fought valiantly to keep Julian on time, to Lewis the producer who handed the correct piece of paper to Julian at the correct time and dangled his large clock at Julian! Thanks also to Dave, and to Tim, another producer, who helped out with teas, coffee, children and anything else that was required well above and beyond the call of duty. It was a great party - when's the next one please?