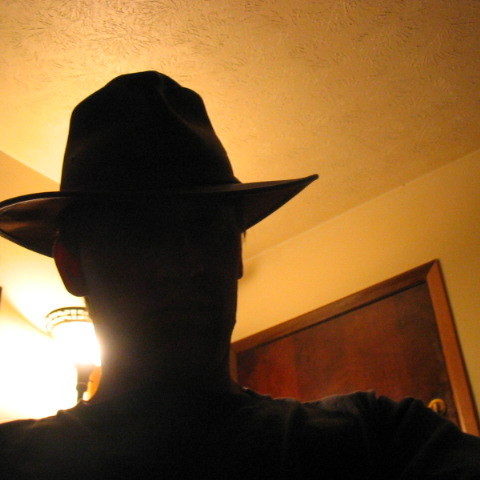 About Me:
C.D. Allen is a writer of supernatural thrillers/mystery slipstream that sometimes leans in the direction of horror. He's published several short stories and is working on a novel called The Tenebrous Habit, which introduces Dr. James Devon, cultural anthropologist and cult deprogrammer, who finds himself working through a mystery that involves a supposedly non-fictional history book and tales of ghostly nuns that serve the devil.

Books And Authors I Like:
Too many books to name, really.

I decided to write a little more about my work, for those of you who don't know who I am or haven't read what I've published.

First off, where I like to write is a bit strange. I think of myself as a suspense/crime writer with an interest in the supernatural and occult. I don't so much write horror, though I do on occasion, but most of my work skirt the edge of the possible. That is, certain people believe that it's very possible ghosts walk in shadows around us and can sometimes be seen. So I go there. But most people do not believe that people run around fighting demons with swords. That stretches the imagination into fantasy-land, so I reject those possibilities in my novels. (I have, however, stretched this envelope with some of my shorter stories for horror magazines and anthologies, but I don't write many of them. Even most of my horror remains with the possible.)

I don't read many short stories, to be truthful. I'm sort of hard-wired for 'roomy' pieces, so I do better work on novellas and novels and enjoy reading them more as well. That is why I've slowed down my work on short pieces and am working towards finishing my first book (which is now in editing).

I enjoy editing other's work, so I belong to +The Horror Library+ workshop at Zoe. There, I analyze and critique other writer's work. Doing so has helped me learn a helluva lot about what to do and what not to do, faster than I've ever learned before. With any luck, my work will be on shelves sooner than I first suspected (crosses fingers).

That's about it for now, but I'll leave you with other author's reactions to stories and novellas that I've published. Have a good day everybody!

"The best of the bunch comes from C.D. Allen, who co-edited the entire volume with Molly Feese; his “The Rector House” is an old-school horror show in the vein of H.P. Lovecraft, with a man who has no family suddenly learns he does, and travels to the big, spooky manse in which they live to discover their secrets. They number quite a few, all of them repulsive. I’d deem it [nearly] flawless . . ."
~Rod Lott, www.bookgasm.com (reviewing the anthology, Dark Distortions)


"The People Of The After. I loved this story, the provocative language and images, the subject matter and the idea of the After People. I liked that it was a story about family and struggle on a large scale and of love. The end was as good as the middle..."
~SJ Finn, author

"[...The Rector House was] well-written, with nicely realized elements of the disturbing and macabre. The characters, while none are what I'd call highly sympathetic (and I'm not saying they should be), are convincingly portrayed - especially Samuel, who I found to be a particularly frightening character with his perversions and dark practices. Also, the revelation of his children's true nature was a very nice, and well-depicted, segment of the tale."
~D.C. Sowders, author

Todd Banks said…
Things are going great. Just looking for a home for an anthology idea I have. No luck as of yet.

Daniel Hatadi said…
Glad you like it, Charles. Sometimes I'm completely blown away by all the activity that goes on here. I can never keep up!

L.J. Sellers said…
Hi Charles
Your stories sound quite interesting. I too edit novels (for a living) and learn so much from the process. Reading fiction is the next best instructor.
In theory, I should be a better writer by now! (LOL)

Lyn LeJeune said…
I think it's great you're writing crime with a paranormal edge...it's in demand by many agents. I've already completed mine and My book, The Beatitudes, is a paranormal thriller set in New Orleans. It will be out in the fall and I am donating all royalties directly to the New Orleans Public Library Foundation. Libraries support the infrastructure of a great city, so I have started The Beatitudes Network to promote awareness of the importance of public libraries in NOLA.
The blogsite www.beatitudesinneworleans.blogspot.com describes the Network, has excerpts from The Beatitudes, recipes, and more. Merci mille fois. Lyn Lejeune.
Writers, please pass the word…..it’s for a good cause….don’t let the libraries of New Orleans or the US go the way of The Great Library of Alexandria. P.S. just posted an excerpt on my page here on crimespace.