"The action is fast-paced with many twists and turns and Mariotte has obviously done much research on the intricacies of banking transactions.

"The Devil’s Bait is an intriguing tale with loads of action and well written characters and I’m giving it 41/2 spiders."

As a book reviewer, one of the areas of the book I analyze is writing style. I try to inform the potential reader about what type of book I’ve read.

Think about the different authors you’ve read. Besides the different genres having, or sometimes requiring, different styles, consider the multitude of authors in only one genre.

Stephen King writes flashback scenes with a lot of detail.…

These days, it's hard to find a crime fiction which doesn't include a serial killer: A single death might seem to boring or insignificant to shape a novel around. But in most of these novels, the character of serial killer is just one element in the story and not the biggest part of the plot.

Therefore we looked at the books we have read during the…

There's been lots of buzz surrounding Owen Laukkanen's debut novel The Professionals, so I was really eager to read it. Oh boy, seriously -…

IN THE GRIT OF CRIME

Crime novels tend to vary. Not every other book is the same. Even if the story has some uncanny similarities to another book, the feel of it as a whole would be quite different. Every author has their own signature, of course, and they stamp down their own unique style on every piece of work they pen down. Even if we try to prevent it, a little bit of ourselves still bleed into our work. This makes any given author distinguishable from the next one.

My new archaeological mystery has just been released by Dark Oak Mysteries.  Please read.  If you do, I'll send you frequent flyer miles!…
Continue 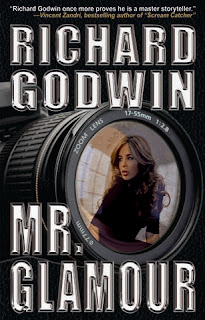 " by Fuminori Nakamura. Born in 1977 and graduated…

This is as close as you get to Agatha Christie: "Death at the Jesus Hospital"

David Dickinson, the Irish author of Lord Francis Powerscourt series. With a first-class degree in Classics from Cambridge, he worked in British television (BBC) for many years and was the editor of Newsnight and Panorama as well as Monarchy. He now divides his time between Somerset and France writing his…

Review: Stick a Needle in My Eye

Crime author Julia Madeleine is all about needles. She works as a tattoo artist in Canada, penned a short story collection titled…

Frieda Klein is a…

Hold it! First something you need to know before you read any further. This ain't no fiction, and I ain't no writer.

There are a couple reasons I got into this.

2) I like good mysteries (not always the same thing).

4) Once in a while you have to push yourself, even as a writer, and do something that neither you nor anyone else thought you might try. I've written several "hardboiled" mystery stories in the past but all of them had some other element- scifi, fantasy or both-…

Last year about this time, I picked up the latest C.J. Box novel and reminded myself how much I enjoyed Box's…

At Love Is Murder 2012, non-fiction author Gaye Mack went to our all-day pitch event and walked away with the agent she most wanted for her first novel. She graciously agreed to share her Love Is Murder experience with KISS KISS BANG BANG.

DPG: Tell us a little bit about the novel you pitched.…

I was thrilled when Captain Paul Marshall, of the Wightlink ferry, St Clare, welcomed myself, my husband Bob, and our dear friends Nick and Linda Leader on to the Bridge on a glorious sunny morning on Friday 23 March.  The occasion was  not only to give Captain Marshall a signed copy of the DI Horton crime fiction novel, A Killing Coast but to surprise Linda…

new here. sort of new to this genre although not as a reader.

normally i do monsters, aliens, elves, spies, super heroes and that sort of thing. I wanted to write some things set in the actual  world. so there's a thing coming up in ELLERY QUEEN and there's the ebook, first of four.

and there's me talking about it, from time to time.

thanks for the use of the hall.

WHY I WRITE MYSTERY/CRIME FICTION E-BOOKS

I come by my addiction to crime fiction... um... honestly. As the son of two 1950's era ex-heroin addicts and ex-cons from Los Angeles, crime is in my blood. My dad did a bounce in Soledad for Forgery, and mom was in Norco for Possession of Narcotics. I also had a grandpa in San Quentin, an uncle in Chino, my sister was also in Norco, just like dear ole Ma. One of my childhood friends became a serial killer. That's California for ya!