Naming and Renaming Yourself

I got a book contract yesterday, and it forces me to make a decision. Since the story is quite different from everything else I've got out there, I have to decide if I'm going to use my usual author name or choose something else.

"Experts" in the industry (if there is such a thing) often suggest an author have a name for each different genre or subgenre. I began with historicals. so Peg Herring should be associated with them in the minds of readers. Since this book is paranormal… Continue

A Great Site for Books

I finally finished the third of my Al Pennyback mystery series. I've been working on this particular series for over eight years and have about ten rough drafts stored away. Every now and then, I get a call from the muse, and I take one out and begin to cut, slash, rewrite and agonize to get it into readable form. I think number three is better than the first two - "Memorial to the Dead" starts with a corpse in front of the Vietnam Veterans Memorial Wall in Washington, DC and starts our hero… I hope I will see some of you at the Deadly Ink conference in Parsippany, NJ, June 25-27. Conference organizer Debby Buchanan has asked me to sit on two panels, one of short story writers, and the other called "Writing the Opposite Sex." Talk to Chicago writers my age or a little younger – I have silver hair – and most will tell you they have been influenced by Nelson Algren.

Algren was 41 when he won the very first National Book Award for his novel The Man with the Golden Arm. That was in 1950. It’s a novel of drug addiction, gambling, and life and death among the people of Chicago’s Polish Downtown district. Algren lived there. He knew well the drunks, pimps, prostitutes,… Continue

In 1947, two years after witnessing the death of a young Jewish woman in Poland, Charlie Berlin has rejoined the police force a different man. Sent to investigate a spate of robberies in rural Victoria, he soon discovers that World War II has changed even the most ordinary of places and people.

At my most recent book signing people asked me who I'd want to play Hannibal Jones on the screen (Duh! Shemar Moore.) But talking about whether my books should go to the big screen or become a drama series raised one of those odd grammar questions that keep me puzzled about our language.…

I've been interviewed by Susan Whitfield

Author Susan Whitfield kindly invited me to be interviewed by her for her blog and I was delighted to accept her kind invitation. the interview is 'live' today and it would be great if you'd like to pay her a visit and perhaps leave a comment at http://www.susanwhitfield.blogspot.com/

Author Colin Cotterill at SCENE OF THE CRIME

Dr. Siri to the Rescue: The Laotion Novels of Colin Cotterill

If any of you have had a chance to check out my Facebook page you will see my plea: Am I your Guest Blogger?

For the last week I have been struggling with my current crisis: My laptop crashed.

No, when it happened I didn’t scream and run around in circles with my hands on my head like one of those cartoon characters my son watches on Nick. I was prepared. I had a backup. Unfortunately, I didn’t discover until I restored my files that my backup didn’t include my Outlook. So… Continue

A gaggle of Chicago writers were sitting around a table – maybe at the Billy Goat Tavern with a beer in hand – wondering how they could honor the best of their numbers. And someone said, “Hey, we need a hall of fame. They got ’em for football players, race car drivers, and Greyhound dogs [the National Greyhound Hall of Fame is in Kansas]. Surely we can have one for writers.”

And thus the Chicago Writers Association created the Chicago Literary Hall of Fame a year and a month ago. The… Continue

No, not weapons of mass destruction. WIP is Work in Progress and for me, that WIP just became a Work Maybe Done. "Maybe" is there because I can always find things I want to fix.

My WIP became a WMD last night, but already I'm thinking that I could tweak a couple of characters a bit so they're more understandable. And the part where the bad guy chases them through the house...maybe a bit more action? I'd better read it again.

Maybe for me there's no such thing as Done. Maybe I…

Meet Me Tomorrow in DC

This month's meeting of the Mid-Atlantic chapter of Mystery Writers of America will feature the launch of "Bad Cop, No Donut," a collection of tales of cops behaving badly. I am one of the 15 crime writers represented in the anthology, and one of the four who will be at the meeting. After the reception at…

Inspector Pekkala - known as the Emerald Eye - was once the most famous detective in all Russia, the favourite of the Tsar. Now he is the prisoner of the men he once hunted.

Like millions of others, he has been sent to the gulags in Siberia and as far as the rest of the world is concerned,… Continue

On 8 June at 7pm you can listen to my interview with Rob Richardson at Express FM talking about my crime novels. It is broadcast on 93.7 or you can listen live via the Express FM web site. The interview was recorded last Wednesday and I can't recall exactly what I said now but I do remember the music I chose, which might put you off, or not as the case might be. I am not certain whether it is permissible and if not, I apologize. At this time I would like to mention here that I recently distributed my June 2010 "Looks Info" newsletter that is directly related to my primary website: www.LooksInfo.com

Best wishes to all and, again, I apologize if website addresses are discouraged in this CrimeSpace forum.

Dead of Knight by William Potter-Get Yours On Kindle! 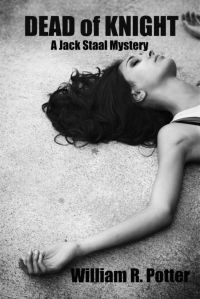 "A serial killer dubbed the "Birthday Boy" is terrorizing the unsuspecting citizens of Hanson, British Columbia. The sadistic murderer chooses to target only women on their birthdays, but why? Hanson Detective Jack Staal… Continue

My book signing at the Borders Books in Warrenton, VA was a pleasant surprise. Traffic was worse than expected so I arrived late. But the staff members were especially supportive. The store had few visitors that evening but I still sold out of books in three hours. I was not quite as successful at Borders in White Marsh Mall, but I did…