And that's very good news indeed. I'm grateful. PW has generally been good to me, but it is particularly helpful now because my new publisher, Severn House, is very pleased.

Given the reputation of Kirkus for savage reviews, I'm pleasantly surprised. Still, a star would have been nice.

I find that I like doing interviews. The only one that was uncomfortable was the very first one, where the interviewer was working for the local newspaper and inisted on coming to my house. My first thought was: what will he think of my house? Maybe I'd better clean, rearrange the furniture, cover the coffee table with impressive books, give the dog a bath, make coffee . . . What do interviewers eat? Do I need to buy a new outfit and get my hair done? By the time the man showed up, I was a…

How nice to find a belated review!

THE CONVICT'S SWORD was released a year ago, my last book with Penguin. I didn't get as many reviews as I'd hoped for, given that I was prouder of that novel that any of the earlier and well-reviewed books. Now I'm with a smaller publisher (Severn House) and reviews are even harder to come by. So I really didn't expect the pleasure of getting a review on last year's novel, and such an intelligent and well-written one one at that.

You may read it here:

Today I went a little mad.

Things have been all around unsatisfactory. All those years of work. All those books. All of those miserable hours of promoting them. All of the diappointments. And nothing much to show for them.

So I blew the advances for my latest two novels (plus a sizable chunk of savings) on a painting. 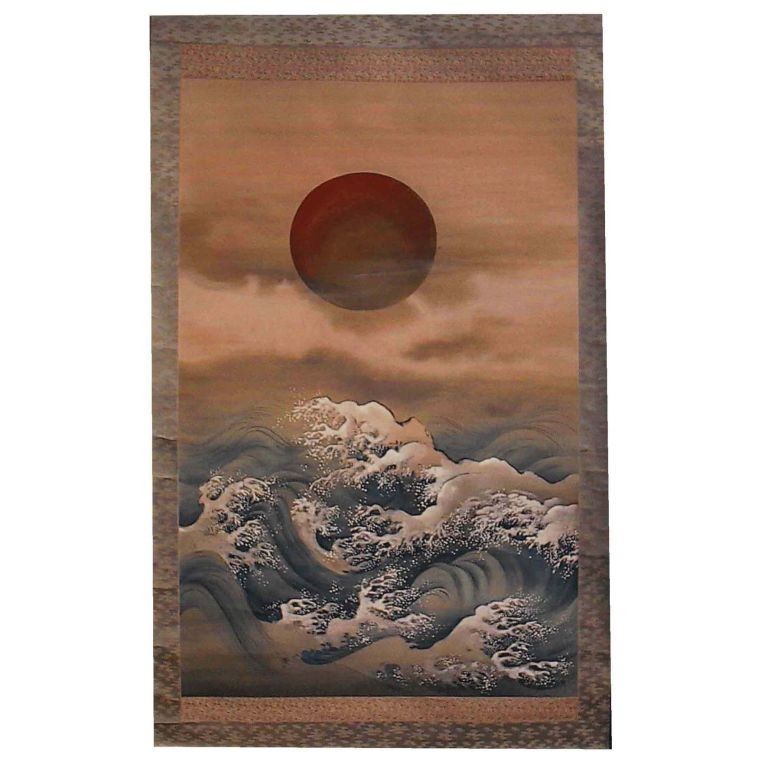 It's Gone on Sale in the UK: Theoretically it was not supposed to be released until the 28th of July, but I've noticed that for Amazon such dates are flexible. U.S. release is not until October 28., yet I'm told it will be available some time in August. It's all very strange, but not at all bad if that gives me a little extra time to sell a few books before the libraries have them.… You may recall how horrified I was when my French publisher chose the photo of a geisha to put on my fourth novel THE ISLAND OF EXILES. This is number five, THE HELL SCREEN. They tried harder, because I was so unhappy, and this one is much better and fits the story. In fact, I like it a lot. What I still don't understand is that they think historical mysteries will sell better with modern…

The new cover for MASUDA AFFAIR: As you can see, the publisher didn't pick my design. I was disappointed, but on the whole, this is ok. It's Japanese art, and it doesn't conflict with the time or setting of the novel. And my name dominates! I didn't even have to ask for it. I could come to love this.

It turns out, the artist read my blog about my troubles with… About that MASUDA AFFAIR cover

(Apologies for double posting. Thanks to Pepper Smith's help I got the image up, but then the text refused to appear on the same page.)…

I think we all need a break some time. Enjoy!

These days they are balm for my lacerated feelings re publishers. A few weeks ago, a serviceman wrote from Afghanistan and that reminded me that I'm really comparatively well off even as a "newly-unpublished" author. Today my ego received another great boost: 3 fan letters in one day, and one of them from a university professor (I have had others, but still!) who plans to use one of my books as reading material in a course he is teaching on Asian culture in American film and fiction. How great… Continue

. . . I find a fan letter from a soldier in Afghanistan. He says he found one of my books there and ordered the rest, because they help get him through his days there. I cannot tell you how humbling some fan mail can be. And what a gift!

About those Amazon reviewers . . .

they will surprise you! I liked this one well enough to share. Clearly, the reviewer is sufficiently familiar with the historical background to know what he/she is talking about.

Eleventh-century stress, December 12, 2009
By Patto (Vermont) - See all my reviews

Amazon Verified Purchase(What's this?)
This is a delightful series, and the latest book, THE CONVICT'S SWORD, more than upholds the high standard of the Akitada mysteries. The book paints a… Continue

Today I received an offer from a Hungarian publisher for the first book in my series. They say, they like the whole series, but the economy is bad there, so they are only buying the first. I'm greatly "chuffed" by their interest. The whole eastern bloc has been amazingly supportive.

Belatedly and pointlessly, another review:

I just found this via Google. No idea where it's been hiding. I also found out that my book was one of the 10 bestselling tradepaper mysteries at Poisoned Pen in August.

The sixth Sugawara Akitada novel, set in eleventh-century Japan, finds the Ministry of Justice official leaving his job to hunt down the murderer of an old friend. But his… Continue

Presumably typing "The End" for a new novel spells exhilaration for authors. Frankly, it's never done this for me (just as I've never thrilled to holding one of my books). Invariably, there are so many things left to do before the book goes in the mail. In my case, there a few loose ends to check, a historical note to write, a neat quote to find, a map to draw. None of these pleases me. They are chores. So I'm depressed.
I'm even more depressed by the thought that this book may never see… Continue