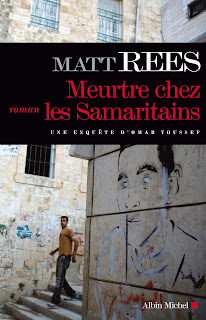 It’s great to hear good news. It’s even better to hear it when you’ve just arrived in Paris. Everything sounds better when you hear it in Paris.

Last week I had a few days in the French capital courtesy of my publisher Albin Michel, which brought me over for the release of my third Palestinian crime novel “Meurtre chez les Samaritains” (English title: “The Samaritan’s Secret”).

On arrival my publicist, a delightful Marseillaise named Agnes Chalnot who works with the elegantly Parisienne Florence Godfernaux, informed me that the first of my Palestinian crime novels “Le Collaborateur de Bethleem” (“The Collaborator of Bethlehem” in the US; "The Bethlehem Murders" in the UK) had been shortlisted for the Prix des Livres de Poche. The winner will be announced in the autumn, but in the meantime it was a lovely way to start my visit.

Albin Michel usually puts me up in the Hotel Lennox, just around the corner from their offices in Montparnasse (that’s the 14th Arondissement, if the numbers make sense to you as they spiral out from the very center of Paris…). It’s a fabulous old artistic area. Norwegian-born photographer Ulf Andersen has lived in the neighborhood a long time and, as we walked about, he showed me the atelier where Picasso used to work, the café where Sartre (“He was very ugly,” Ulf remembers) used to have his morning coffee, and the art deco Hotel Aiglon where Bunuel used to stay when he visited Paris. Nowadays Montparnasse is a bit too pricey for artists, who tend to live in the area near the Bastille.

I enjoy returning each year to Paris when my books come out. Partially that’s because of the culture of books and intellectualism that’s specific to France. The head of Albin Michel who’s a great supporter of my books, Olivier Betourne, used to be the editor of Jacques Derrida, the great deconstructionist philosopher, and my editor Vaiju Naravane is a polymath Indian woman who’s able to tell hilarious tales of trekking to the furthest regions of southern India with Shiva Naipaul.

It’s also because I’ve come to know some of the journalists I meet quite well, particularly those like Philippe Lemaire of Le Parisien and Vladimir de Gmeline of Valeurs Actuelles who have been out to Jerusalem to tour the West Bank with me. This year Philippe remarked that I seemed more relaxed than when my last book came out. I was pleased to hear it, and I must credit my wife Devorah and my son Cai for calming me down!

Another friend I was glad to see during my quick visit was Francois Busnel. He’s one of the most important literary journalists in France and he has an approach to his work that’s vastly different from most of those who write about books. Francois came to Jerusalem to write about me a couple of years ago. He travels each month to interview writers around the world. This summer he’s spending a few weeks in Afghanistan with his friend Kabul-born Atiq Rahimi, who won the Prix Goncourt last year. Not your typical book reviewer, as you can see. If you read French, take a look at his articles in L’Express. They’re excellent.

With only a few hours left in Paris, I picked up a Quiche Lorraine and feuillete de Roquefort near the parliament. The quiche you probably know has chunks of ham. The feuillete is a rich, rich pastry packed with Roquefort, and frankly it was a little too intense for me. But as I sat in the Jardins du Luxembourg with my pastries, watching the French reading books (not playing with Blackberrys) beneath the massive bust of Paul Verlaine, I wished I could take a little of their ethos home with me.