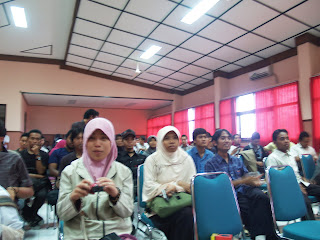 My editor at Dioma Publishing in Malang, Indonesia, Herman Kosasih filled me in on a couple of events they organized there for the launch of A Grave in Gaza (it’s the second of my Palestinian novels, but Dioma decided to publish it first; they’ve purchased rights to the first four books). That includes a debate at the Islamic University in Malang.

This is particularly important to me because Indonesia is the first Muslim country in which my books have been published. As the hero of the books is a Palestinian Muslim, I’m very keen that his story should be read by Muslims around the world.

Here’s a little of what Herman wrote to me about the debate at the Islamic University: “It was great. There were Quran readings, prayers, speeches. Then the Indonesian National Anthem and the Hymn of Pergerakan Mahasiswa Islam Indonesia, which is the Association of Indonesian Islamic Students. Present were the Vice Rector of the university and the representatives of the movement throughout Malang. 200 people attended it. Wow. I was very surprised to see them all. Out of my imagination.”

Mine, too. Wonderful news. 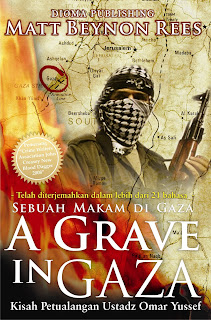 Herman continues: “There were many questions including whether the author had a plan concerning Palestine and Israel when he wrote this novel. They agreed that cruelty and murders can be done by people with various religions. The atmosphere of religion influenced the discussion.

“The dean of the Law Faculty said that your idea in the novel is similar with what Gus Dur has said concerning Middle East affairs. Gus Dur is a former president of Indonesia, a proponent of minority rights in Indonesia and a champion of religious dialogue. He is much beloved among the students who most of them are followers of NU, a branch of Indonesian Islam. They are usually moderate and traditional.

“I concluded that they appreciate your novel. I also made some friends there.” 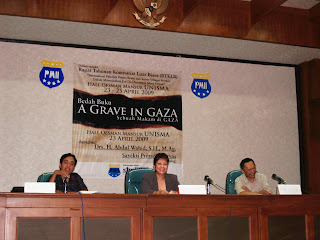 It’s clear to me that the debate in Indonesia was thoughtful and carried out with consideration for other people as humans – rather than in a spirit of religious antagonism. I’m very touched by that.

In another email, Herman told me: “On May 15, 2009 we had a kind of talk show in Jakarta in one of the biggest bookstore chains in Indonesia for A Grave in Gaza. The speaker was a journalist who has visited Middle East.”

Herman also sent me a lovely set of playing cards from Bali. I’m using them to teach my little son how to count.

Comment by I. J. Parker on June 1, 2009 at 2:11am
I've had a similarly encouraging experience with my own Indonesian publisher. They even created a blog about my protagonist. Very nice people!