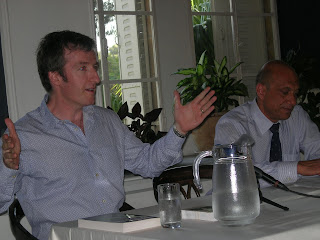 This weekend I was the guest of Munther Fahmi, who runs the excellent bookshop at the American Colony Hotel in East Jerusalem, for a reading from my newest Palestinian crime novel THE SAMARITAN'S SECRET. Munther and I have been scheming for some time to organize an event, so it was great to finally get it together.

I knew it'd be an interesting crowd at the Colony, which manages to be something like neutral ground (although many Israelis might dispute that) in Jerusalem. There were foreign journalists and diplomats, Israelis and Palestinians among the sizeable crowd, including some old friends I haven't seen for some time. Oh, and tourists, too -- a rare species since the intifada, but I signed for visitors from Berlin and Seattle, Ireland and Serbia.

I was also delighted that one of the people on whom I based the character of a World Bank worker in THE SAMARITAN'S SECRET happened to be staying at the Colony this weekend. I was able to give him the news that I'd turned him into a woman and changed his employer. He seemed pleased with both alterations, and I hope he enjoys the book. 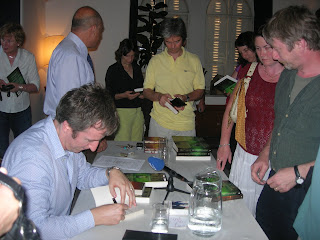 I've edited the photos so that you can't see how hot it became in the room. By the time I was signing the books at the end I was rather inelegantly dripping with sweat. The alternative, of course, was the honking of passing Arab wedding convoys and, as antiglobalization activist Naomi Klein discovered when the windows were opened to let in some air for her reading immediately after mine, the evening call to prayers by the muezzin at the mosque next door. (It's the Mosque of Sheikh Jarrah, named after Saladin's doctor, whose tomb it houses.)

To get on Munther's mailing list for future readings at his excellent bookshop, write to him at bookshopat@gmail.com.