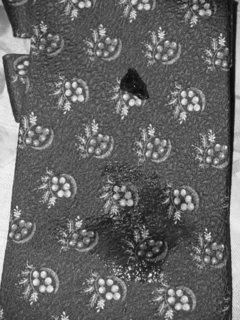 The internal affairs investigator came out to the waiting area and brought me back to his desk. He was short and heavyset, almost dumpy looking. He had a gut that was so huge he would have to take someone else's word for
it to see if shoes were tied. I guess that was why he wore penny loafers. His plaid jacket was probably in style when he wore it for his first holy communion. His necktie only reached halfway down his shirt. I wasn't sure if that was because his gut was so big or he liked wearing ties the way we did in Catholic school. If his collar wasn't unbuttoned and his tie loosened, I would have bet it was a clip on. He smelled like a combination of stale cigarettes and B.O. He sat down carefully at his desk. He wedged his massive carcass into his chair, squeezing himself between the arms of the chair like a fat lady squeezing herself into an old girdle. His desk was an extension of himself, slovenly and piled high with papers and files. As if it was part of a running gag, a jelly doughnut sat leaking a red glob of an unknown flavor onto a paper napkin.

"Listen", he said leaning forward. "This should be pretty simple." He picked up the doughnut and licked the filling. It was a disgusting sight that would be burned into my retinas for a long time. A small bit of filling fell onto his tie. He wiped it off with his thumb, which he promptly licked to ensure that he didn't miss any. A closer examination of his tie revealed that I could probably identify the last four meals that he ate while wearing it.

He had me tell him everything that happened. It was fairly straightforward. I didn’t really see what happened. I rushed in I heard Rob yell and spun around as he fired his gun. I had all the details minus the real details. That was always a question. What if your partner got in a questionable shooting? Do you lie to help him out? Do you tell the truth and let the chips fall where they may? Well, it didn’t really matter. This was a pretty clean shooting as those things go. An almost murderer with a rap sheet as long as your arm, drugs and a stolen gun in his apartment. Back in the day you would have described his Roscoe as a “Saturday night special”. Now it’s just another gat used by the average shit stick. Department policy and politics would result in us being off the streets for several weeks. Rob longer than I because he actually fired the shot that killed Ali. Luckily politics would not be overplayed in this case. As is often the case a clean shoot can become a nightmare when factors beyond your control, beyond the events actually surrounding the shooting come into play. People with agendas and prejudices sticking their two cents in, attempting to capitalize on something they have no business with or understanding about, that can ruin lives and careers.