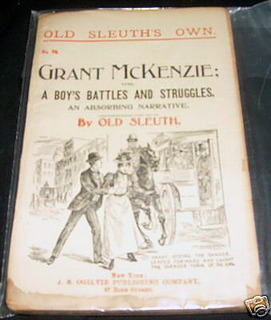 Old Sleuth was a dime novel series of novellettes of about 80 pages that were published in New York from 1895 to 1898 by J.S. Ogilvie. They were primarily detective stories set in New York, though several are romances as well. Content is usually boys adventure, or detective/mystery, with some attention to gender and race. Advertisements at the front and back often include ads for "guides to courtship" and "guides to kissing".

I'm looking forward to seeing it when it arrives.

Comment by Grant McKenzie on March 6, 2008 at 11:34am
Would I be that shallow?
Of course, I would. I received a notice that my book popped up on Amazon.co.uk for preorder and I was searching to see if it popped up elsewhere. Turns out it's also listed on Amazon Germany. No cover or any info yet as I'm still working on line edits ;-)

Looks nice, let us know what it's like when you get it.