The first was for the Eugene Symphony Guild. I was invited to be the speaker at one of their fund-raising dinners in a member's home. A couple of dozen people paid $30 apiece to hear me babble for an hour or so before they got their dinners. And 10 guild members dashed around producing and serving and clearing up the dinners. Apparently something went wrong with the prep, so I just went on talking. I've been writing for nearly thirty years, so I can go on talking about my career and my books indefinitely. What I can't do is manage the sash when I dress up in my '20s outfit. My waist is right where nature intended it to be, and a bit of silk tied around my hips very quickly descends towards my knees. Nor am I one of those people who can blithely toss a scarf around their necks and look elegant. Mine won't stay tossed. My hair did stay up, though, something of a miracle, and my hat stayed on. I won't go into the business of the tights--or perhaps I will. I very rarely wear tights/pantyhose/stockings/even knee-highs. Until I started putting them on, I didn't realise quite how rarely. The elastic had quit in the first 3 pairs I tried, and it wasn't too happy in the pair I ended up in. Daisy, of course, would have worn a suspender belt (garter belt?), and her stockings would have stayed up, though the seams might not have stayed straight.

So there was an element of the ridiculous in the Friday signing, but I had an appreciative audience (who bought quite a few books) and a delicious dinner. 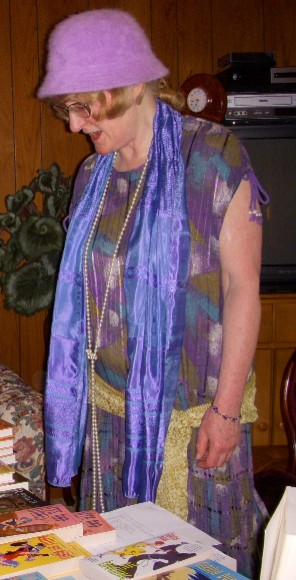 Saturday night was another story. A very small local indie bookstore had invited 7 or 8 authors to a signing in aid of books for kids. The store is tucked into the corner of a pizza place cum concert venue. The bookstore owner had listened to the scheduled band online and thought they sounded quite mellow. They turned out to be so loud we were issued earplugs. It was impossible to talk to anyone about our books, which didn't really matter as no one came anyway--or at least only to listen to the band and eat pizza. I was lucky enough to sell 2 paperbacks, but one writer who came all the way from Corvallis, about 40 miles, didn't sell a thing. The guy sitting next to me sold almost enough to cover the cost of the pizza and coffee he bought.

Goes to show you never can tell. Carola

Comment by Carola Dunn on June 27, 2008 at 11:36am
I should have mentioned that this was first posted on the LadyKillers blog.