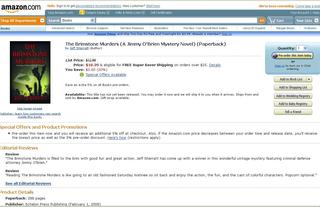 Hooray and halleluiah! My new book the BRIMSTONE MURDERS just popped up on Amazon. The book won’t be released until the first of February, but Amazon is accepting advance orders and offering a nice discount, I might add. So, last night I sent emails to family and friends, nice people who had previously expressed interest in my books.

My friends read the email and responded favorably and it was gratifying to watch the Amazon sales ranking number spiraling lower as the orders flooded in throughout the evening. And as pleasant as that was, it had been even nicer to receive emails back from some of them expressing words of encouragement and support.

One email—from my first cousin’s beautiful daughter, an intelligent young woman who’s also a writer—said that she’d just ordered two books from Amazon, mine and the new Russian translation of WAR AND PEACE. I hope Christine won’t be disappointed…with the translation, I mean.

I would like to thank everyone who ordered an advance copy of my new book, thus making the Amazon debut a rousing success. All writers should have such friends!

Comment by Rose Mercer on November 3, 2007 at 11:44am
How wonderful for you. Congratulations!