How do you cope with book reviews?

Opinion is free, and part of being a published author is that you have to accept that some people will love your books, others will loathe them.  What one critic raves over another will slate.  Most authors dread reviews.  For nine months (and sometimes longer for some authors) you have poured your heart and soul into that creation.  You have invested a great deal of time and emotion in creating it and, as with a child, you want it to be well received in the world. When it isn't it can hurt.

But history is littered with scathing reviews of  books, plays and films which have gone on to become best sellers. As a published author you need to learn to take the rough with the smooth, which is not always easy, but in order to carry on writing that is all you can do. It is about keeping your confidence up while writing the next novel.

I have been fortunate to have some fantastic reviews for my DI Andy Horton crime novels and my thriller novels, and some wonderful feedback from readers who love them including praise from people working in television and radio.  The best of my reviews smile down at me from my notice board in my office and are there to lift my spirits and encourage me when I receive a less than good review!

Fiction is art and is therefore subjective.  It is a matter of taste.  It would be a boring world if we all read and enjoyed the same sort of novel. So here's to variety and to opinion, and here is also to the right to express it freely even though it sometimes might not be what we would like to hear/read!

You can read the reviews of all my crime and thriller novels on my web site. Meanwhile here are the latest reviews for Footsteps on the Shore 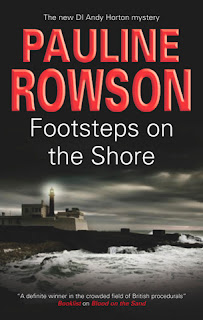 "It deserves mention in the same breath as works in the upper echelon of American procedurals (those by Ed McBain or Joseph Wambaugh for example) and their British counterparts, including the work of Peter Robinson and John Harvey. Andy Horton is an especially good series hero, a likeable fellow with plenty of street smarts and the requisite personal baggage – an abrasive supervisor and an antagonistic soon-to-be ex-wife (like Harvey’s Frank Elder). Procedural fans who haven’t already read Rowson should be encouraged to do so in the strongest possible terms." Booklist (USA)

"Horton presses on to clear up a skein of crime as tangled as one of the harbor’s ancient fishing nets. Rowson’s latest should please both Andy Horton fans and puzzle aficionados." Kirkus USA

PS If you read the full Kirkus review of Footsteps on the Shore Andy Horton fans will spot the mistake.

Comment by Pauline Rowson on June 4, 2011 at 4:00am
Yes, it's better to be reviewed than have no review, because, as you say Benjamin it gets you noticed. And totally agree, Dan, first I just wanted my novel to be published, then I wanted my next one to be published, and the one after that and so on...  Then I wanted everyone to love them, well at least a few people... then I sweated over the reviews, with each stage of being a writer it alters but I'm loving it.  I am just so pleased to be writing, to be published and that people enjoy reading my novels.

Comment by Benjamin Sobieck on June 3, 2011 at 11:58pm
There's no such thing as a bad review if the reviewer lets as many people as possible know he/she read your book. Bad exposure is better than no exposure, especially when thousands of works are released each day.