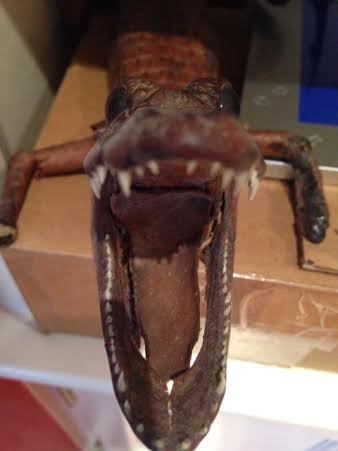 But I wouldn’t have it any other way. It’s cozy in there and I feel safe.

Its walls are red – hardly a safe color, but it keeps me alert. My desk is a granite slab that used to serve as a bar in our old place, and there’s a fireplace with an antique wooden mantel showcasing two Byzantine icons (one of Christ, the other of Mary), a matching rosary, four family photos, a clay ballerina my middle daughter sculpted for me, an Indian flag (we’re not Indian, don’t ask), one dragon-themed baby shoe from Hong Kong, and a signed, framed World War II cartoon featuring Mussolini being led around on a leash by the Axis powers.

On this framed cartoon hangs an authentic Mother’s Cross – a ribbon necklace with a metal Reich symbol that was given to women who’d born children for Nazi Germany. Nobody in my family did – we’re both Catholic and Jewish, so we wouldn’t have volunteered for such an honor (nor would we have been asked).

The thing is I like to surround myself with objects that inspire my work, and for good or ill, Nazi’s and Communists are part of my fiction universe.

Most of the mementos in my office are gifts, except for the Mother’s Cross. I bought that from a collector of Nazi memorabilia. He was selling his collection because he felt people wrongly assumed that he liked Nazis, when in fact, he was just a history buff. It had caused some uncomfortable moments at a few of his wife’s dinner parties.

That, in and of itself, could inspire a couple of novels.

My desk, the former bar, sits on an old, Oriental rug fouled by various pet stains. My dog’s ashes (the dog responsible for most of the pet stains) sit in a wooden box on a little table in the corner next to my bookshelves. This box is lorded over by a framed faux New York Times obituary for the late canine (written by my husband) and titled,Milo Steven Dougherty, Asexual Glutton Canine, Is Dead. It goes on to describe our late beagle mix as “a single-minded ‘perfect eating machine’ who loved Snickers cheesecake, tacos, hollandaise sauce, White Castle microwaveable cheeseburgers, shrimp risotto, anything on the McDonalds breakfast menu and fecal-caked baby diapers.” Rest in Peace, my friend.

Being writers, we have a predictable quantity of books in our house – about 7 floor-to-ceiling shelves’ worth, but the bookshelves in my office are mostly filled with my children’s various pictures and art projects: my daughter’s soccer team photo, my son’s first short story (about the Civil War), and my youngest child’s Kindergarten scrapbook.

There’s also a taxidermied baby alligator among my kids’ artifacts, but I can’t for the life of me tell you how it got there.

On the wall at my left hangs a framed photo of my wedding, a large black and white print of an old woman walking through the streets of Prague, another old black and white – this one of the Tower of Silence in old Bombay, a newspaper clipping of my grandfather’s performance in the 1936 Winter Olympics – he played on the Czech National Hockey Team, a portrait taken of my husband on his first birthday and one taken of me and my first child, my son, when he was one.

The rest of the walls are bare.

But there are two hand-made Czech marionettes that flank my one picture window. My favorite is one I call Vladimir the Great. He holds a violin in one hand and a beer in the other, and reminds me so much of my grandfather, Dede, who could play any instrument by ear. He could also drink you under the table, although Dede would have never, ever tolerated a five o’clock shadow like Vladimir's.

Essentially, my home office holds my life. I care little for jewelry and other fancy things (don’t get me wrong, I don’t knock them and like a fine bauble as much as the next girl) so, if I had to flee my house in the middle of the night, the way my grandparents did, the only things I would take as I rushed my family out the door are in my office. Deeply personal relics that tell the story of my life and fill my imagination.

J.E., you're right - they are surprisingly nice pets. My kids are just crazy about them.

We have two snakes, a Red Tailed Boa male and an amelanistic female corn snake.  They live in separate terrariums, and they only eat thawed frozen rats.  :-)  They are actually really nice pets.

Yikes, we were told that might be a problem. Vet suggested we give them separate enclosures :)

That ought to do it, long as they don't grow and eat one another.

Dan, my son just got two baby snakes on Sunday...

Sounds like a nice little writing hole, Victoria, but now that the dog is gone, what's going to eat the diapers?