I'm thrilled to announce the third release in my Sloane Monroe series, I Have a Secret. 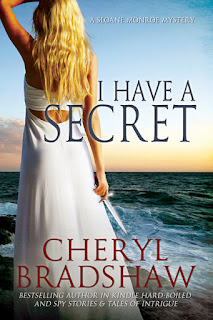 This one holds a special place in my heart because it's based on the hometown where I grew up. I wasn't sure about using the location at first, but the #1 rule of writing is to write what you know.  Agatha Christie used to do this in her novels.  She'd travel around with her husband and write stories based on the locations they visited, a great many in and around the location she lived as well. 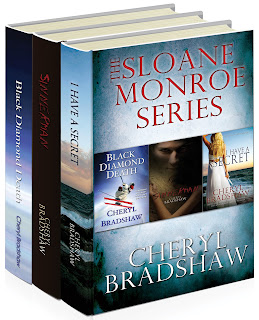 Enter the world of Sloane Monroe in Black Diamond Death...

On the slopes of Park City, Utah’s newest ski resort a woman is found dead. At first glance, it has all the makings of an accident. But what if she was murdered? Although skeptical, PI Sloane Monroe takes the case and learns not everyone is who they seem, and some will go to any lengths to protect their identity.

PI Sloane Monroe has solved every case that’s come across her desk with the exception of one—the brutal murder of her sister Gabrielle. Three years have passed without a trace of the serial killer until today, when a young woman’s body is discovered on a patch of dirt in front of the local supermarket. Will Sloane exact her revenge before Sinnerman slays his next victim, or will she be too late?

I HAVE A SECRET:
It’s been twenty years since PI Sloane Monroe has returned to her hometown of Tehachapi, California, but when a former classmate is stabbed and tossed overboard during the high school reunion cruise, Sloane isn’t about to allow a murderer to run free in her own backyard. But in a town where everyone is harboring secrets, how many more men will die before she discovers the truth?