Footsteps on the Shore once again features the rugged Harley Davidson riding and sailing detective, Andy Horton assisted by Sergeant Cantelli and often thwarted by his boss DCI Lorraine Bliss, and head of the major crime team, Detective Superintendent Uckfield. 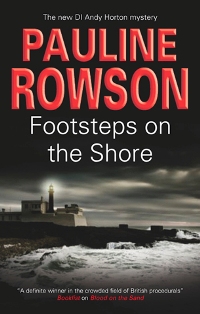 Footsteps on the Shoreis published in hardcover by Severn House and is available from bookshops and on line.

It will be published as an e book later in the year.