The second stop on my book tour of South Wales on the publication in the UK of the tenth in the DI Andy Horton crime series, Death Surge,was at Pontarddulais, a town situated just under ten miles to the north west of the Swansea City. Pontarddulais in English is translated as Bridge on the Dulais, with Dulais meaning black stream, probably on account of its journey through the coal measures.

In the early 1800s Pontarddulais was a busy and prosperous place with two mills and two factories powered by the River Dulais. The path to industrialisation began in 1839 with the arrival of the railway when the Llanelli Dock Company built a line to transport anthracite coal from the Amman Valley to Llanelli. In 1866, a new line was built connecting Pontarddulais with Swansea and from 1872 to 1910 Pontarddulais was transformed from a rural settlement into an industrial community when six tinplate works were established. The population expanded greatly during this period, as workers flocked into the area to find work in the tinplate industry.

Then in 1950 a new and modern tinplate works was built in nearby Trostre and Felindre and rendered the old works in Pontardulais obsolete. The local works were taken over by other enterprises and redeveloped as light industry but many jobs were lost and the light industry gradually began deserting Pontarddulais in the latter half of the twentieth century, transforming the community into a dormitory village according to the information on Wikipedia. I saw no evidence of this though on my arrival, or indeed from the group who attended my evening talk. Pontarddulais looked and felt like a small town on the up. It is indeed one of nine towns that will benefit from Welsh Government funding as part of its Western Valleys Regeneration Area programme. This is being matched by funding secured from Tesco under a planning agreement.

Some well-known literary figures have associations with Pontarddulais, including Edward Thomas and Dylan Thomas, who had several aunts and uncles in the town. So I was in good company both figuratively speaking and literally. 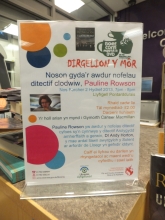 The evening also raised money for Macmillan Cancer Support charity with the small admission charge for my talk going towards the charity.

It was a pleasure to meet everyone and my thanks to Julie Clement and Sarah Loud for making the evening so successful.

Undercurrentthe ninth DI Andy Horton was published in the UK, Commonwealth and USA in 2013.