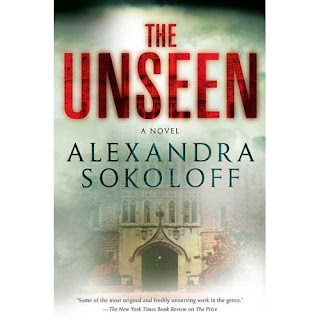 But here we are, magically....... The Unseen hits bookstores this week, officially on Tuesday, but I am informed it's already out there for Memorial Day Weekend, so I thought I'd better mention it, for those of you who are heading straight to the bookstores today.

The Unseen is a spooky thriller that crosses mystery and the supernatural, with some romance, too, this time, because let me tell you, that haunted house I set the story in...

Well, you'll hear more about that, soon. But yes, my genre identity issues are alive and well in this one.

The story is based on the real-life, world-famous ESP experiments conducted by Dr. J.B. Rhine at the Duke University parapsychology lab: the first dedicated parapsychology lab in the U.S., founded in the late 1920’s.

Most people are aware of Dr. Rhine’s ESP studies with Zener cards.

Not so many people know that in the 1960’s Duke researchers also conducted field studies of poltergeists.

In my fictional story, a young psychology professor from California experiences a precognitive dream that shatters her engagement and changes her life forever. Determined to make a fresh start,, she decides to take a professorship in the Duke psychology department, and soon becomes obsessed with the long-sealed files of the parapsychology lab, which attempted to prove whether ESP really exists.

Along with a charismatic male colleague, she discovers a file on a controversial poltergeist experiment which may have been the cause of the lab’s closing. The two professors team up to take two psychically gifted students into an abandoned Southern mansion to replicate the experiment.

What they don't know is that the entire original research team ended up insane… or dead.

This story has been percolating for me for a long time (I've been pretty much obsessed with the idea of ESP testing since I was seven or eight years old), and I was able to do some very cool research for this one, including ghost hunts and a stay in a seriously haunted mansion that I used as the model for my poltergeist house. All of which I plan to talk about at length this month.

Because for the release of The Unseen, I’m going to do 200 guest blogs in twenty days.

But I am, in between signings and bookstore drop-ins, in a non-Konrath, completely un-Type-A way, going to be doing a lot more guest blogs than I usually do in the next month or six weeks or so.

You can catch me today at Storytellers Unplugged ("Do You Believe?") and The Kill Zone ("What Puts the Thrill in Thriller?"), and at Meanderings and Musings on Thursday ("Lessons from the Back Seat") and I will post more low-pressure, non-stress blog tour information on my own blog as I… well, as I figure it out.

Meanwhile, you can read an excerpt on my website, and other ordering information is below.

The Unseen
May 26 from St. Martin’s Press
Hardcover, ISBN 13

Also available in a large print, trade paperback version, VERY exciting, as it means I’ll be able to read it myself!

Or right this minute from Amazon


"This spine-tingling story has every indication of becoming a horror classic... a chillingly dark look into the unknown."

"Sokoloff keeps her story enticingly ambiguous, never clarifying until the climax whether the unfolding weirdness might be the result of the investigators' psychic sensitivities or the mischievous handiwork of a human villain."

And for those of you who have been following my Screenwriting Tricks For Authors posts, I've compiled a Table of Contents so that you can go through all the posts in a relative order, here.

Comment by Mark Young on October 24, 2011 at 5:18am
Interesting story concept and great cover, Alexandra. Best wishes on its success.

Comment by Eric Christopherson on May 30, 2009 at 8:10pm
Sounds very interesting. (And that has nothing to do with my being a Dukie.) I'm going to buy this one. Good luck!