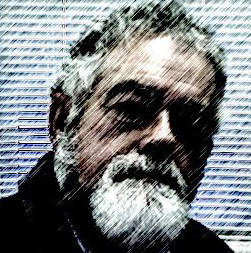 About Me:
After too many years as a newspaper reporter and editor I turned to magazine freelancing and then editing, ghostwrote a book, became a flack, a magazine editor again, wrote a thriller and I'm now extensively revising it.

“No TV,” the stone-faced boy blocking the oak double doors said. “No cameras.” To Moran he looked seventeen or eighteen, nearly a man. The boy glared down the granite steps of the church at the television news crews on the old brick sidewalk.

Slender, about five-ten, he was wearing a stiff white shirt with a polka-dot tie and a navy blue suit, the pants a little too short, Moran thought. The television people knew who he was. He flicked his hands at them and they stepped farther back, out of the path of a few approaching mourners. Moran, maybe an inch or two shorter than the boy, in his late thirties, followed the mourners around a gray mound of lingering April snow and up the granite steps.

“I don’t have a camera,” he said. “Just a notebook. I’m from the Portland Pilot. I’ll just sit in the back where I won’t disturb anyone. All right?”

The boy stared at him. “What’s your name?”

“Jake Moran,” the reporter told him, starting quickly around him through the open doors. “Thanks.”

Moran shivered, feeling the cold dampness inside the stone church, remembering to genuflect before edging into a worn mahogany pew. He had never covered a funeral mass before. He watched the rows of pews in front of him becoming full, writing a rough head count on a fresh page of his reporter’s notebook as the organist played a muted hymn, close to eighty people now.

Soon he heard the priest’s voice, a cool monotone echoing off the high stone walls. “Eternal rest grant unto him, O Lord, and let perpetual light shine upon him. May his soul and the souls of all the faithful departed through the mercy of God rest in peace. Amen.”

The reporter watched him lift his bowed head and open his eyes. Gradually, showing a little dramatic flair. Looking young for a priest, probably younger than forty, with reddish hair and a boyish freckled face. But this wouldn’t be this priest’s first funeral. A prayer for anyone and no one, though Moran knew there would be more of this mass to come, at least a homily. He rested the narrow spiral-bound notebook on his knee like an unsheathed sword as the priest swung his censer, smoke trailing through the air from the little pot of burning incense.

A few more people were filing into the church, a few families with pre-adolescent children, a slender woman with straight, nearly black hair sitting down at the other end of his pew, six or seven feet away. She wore a tailored gray pinstripe suit, a small black leather handbag hanging from her shoulder. Skirt short enough to show off her legs. Athletic-looking, but more like a dancer than a runner. Nice. For a moment their eyes met before Moran looked back toward the front of the church.

The pale boy in the casket on this wet Saturday afternoon had been younger than the boy on the church steps, the youngest in their family. Moran had his name already in his notebook: Daniel Healey. Around the neighborhood they’d called him Danny. That was already in Moran’s notebook, too. In his turn Danny had been this priest’s altar boy, performing the ritualistic Sunday chores that helped bring God close, in the walls, in the air.

Danny’s death had been an unmentioned mortal sin—“died unexpectedly,” in the standard euphemism of the Pilot’s obituaries—but the suicide had been impossible to ignore: the young altar boy had gotten a clothesline up over one of the crossbeams in the nave of the church and tied one end to the arm rest of a pew and then stepped off of the altar with the other end knotted snug around his neck. All that, the cops had told Moran.

Not yet thirteen, Danny Healey had been entitled to a Christian burial because he showed what the church called “signs of repentance” in the note he left on the altar Bible. Please God take my soul, the boy had written. There was a good feature story in it, Moran knew.

The face of the dead altar boy hovered in the priest’s mind. They had been close, almost as close as classmates, though Father Joseph Donnelly was three times the child’s age. He could remember when he’d been as young as the altar boy, shy and awkward, especially around girls, who mostly ignored him. He had been more comfortable with other boys. The younger ones never judged him. They’d looked up to him. Even now, grown up, graduated from the seminary, ordained, finally entrusted with a parish, he still was most comfortable with them—fourteen, thirteen, even twelve or eleven years old—at heart, he was still a boy himself.

From childhood he had known he was born to serve God, and now, at the center of his world, he felt a twinge of shame for the immense delight that welled in him when he had the collar on. Though today he felt the shining weight of it.

Moran, listening to him, knew that Donnelly was shaken by Danny’s death. He could hear it in the priest’s voice, sounding somehow constricted. He leaned forward, trying to get comfortable on the hard mahogany bench, thinking it must have been built to keep parishioners awake through lengthy sermons, or homilies, whatever they called them. Light from the overcast sky dimly illuminated the saints and angels in the tall stained glass windows, not enough to brighten the church.

“We shall never know of the despair that turned Daniel away from life, nor of the problems that he believed only death could resolve,” the priest was saying. “But he goes to Heaven with our prayers, and with God’s grace.” And now the priest whom everyone knew as Father Joe stretched out his arms, lifting the people in the pews to their feet. A hymn, Moran realized, nonetheless grateful to be up off the bench.

Afterward, standing motionless as mourners slowly filed out into the chill rain, he watched Donnelly shake the last one’s hand at the double doors and turn toward him. It was because Daniel was the second son of Michael and Mary Healey to die, the priest knew, that the Portland Pilot reporter was waiting.

They walked slowly back to Donnelly’s cramped office, the priest pausing to pull a damp handkerchief from his pocket and blow his nose. “I feel like I’m coming down with the flu or something, but it’s not the flu season,” he said. A small desk, a chair behind it, another beside it, a rumpled couch jammed next to a file cabinet. The priest could spare only a few minutes before leaving the church to attend the wake, and for this he felt relief.

The reporter kept his notebook inside the breast pocket of his tweed jacket. From long experience he knew the premature sight of it could put people on edge, the way they might react to the unexpected glimpse of a police detective’s shoulder-holstered pistol.

“That was a good sermon,” he said. “I’m glad I came to hear it. And you have a beautiful church.” He paused. “Basically, Father, I want to learn more about the church and the community, and about the Healey family, the parents and the sons. Their story is important, and I hope you can help me tell it. The more you can help me, the less I have to intrude on the Healeys’ grief. You knew all of the sons quite well, I’m told.” Sounding to himself a little like a sales pitch.

The priest nodded, eyeing the reporter with caution. “You can ask me questions, but I can’t tell you anything that I think would invade the family’s privacy. And, really, I should ask them for permission before talking to you about them. If it seems appropriate at the wake, I’ll bring it up then. That’s where I’m going now. There’s only the mother and the oldest son, by the way. The father died a few years ago. Cancer, I’m thinking it was. The widow, Mary Healey, she’s a nurse.”

They walked to the rectory door at the side of the church, the priest carrying a black umbrella, the reporter thrusting his arms into the sleeves of his tan raincoat. “I’ll be in touch,” Moran said, walking away.

The surviving son—the oldest son—had never really seemed to like him, Father Joe thought. Even though he had served, briefly, as an altar boy, but only at the insistence of the boy’s father, the priest recalled, approaching the brightly lit windows of the small, one-and-a-half-story Healey household. They had never really connected.

The stone-faced youth in the navy-blue suit dipped his chin slightly in reply. Stepping past him out of the cold drizzle, Donnelly was grateful for the glass of sherry someone pressed into his hand. He looked around the crowded living room. Somber faces, consoling voices. My flock, he thought.

“Father Joe. Thanks so much for coming.” Donnelly recognized the widow’s familiar voice beside him and turned, smiling at her. Mary Healey’s eyes were bright and wet.

“We all loved Daniel, Mrs. Healey,” he said, gesturing at the people around them, standing in clusters in the living room, before the fireplace, beside the buffet in the dining room. “And now we all comfort each other. We all share your grief.”

The priest had no more words. He ran his fingers through his rusty hair and glanced toward her kitchen. A little more of the sherry would be good.

“Hey, Father, let me refill your glass,” Alex Healey said, holding up the decanter. The boy smiled slightly. “Danny kept a journal, Father, you know, a diary,” he said. “He wrote in it every evening, almost, little summaries of each day. I’m still looking for it. He told me once, sometimes he wrote about being your altar boy.”

“We were close,” the priest said after a pause. “I was close to both your brothers. They were good boys. Good boys.” Father Joe sipped his sherry.