I’m finally officially registered for BoucherCon. I was on the fence, wondering if I could hack it financially, but the Anthony nomination pretty much made the decision for me. No info on panels or anything as of yet but will post when I know more.

See you all there!

Anthony Awards, and My Hair

Money Shot has been nominated twice for the 2009 Anthony Award, for Best Paperback Original and also for Best Cover Art. Congrats to all the nominees.

Also in other critical, earthshattering Faust news that I'm sure you all can't live without (assuming you haven't already seen this on Twitter or my "real" blog,) I'm no longer a blonde! I didn’t win the Edgar, but I beat out both Banks and Guthrie and took the Spinetingler Rising Star award for Money Shot.

Full results here. Congrats to all the other winners.

Swedish Pulp and the FOB party

What do Ronnie James Dio and I have in common? We’re both interviewed in the latest issue of Swedish rock magazine Top Secret. (Scroll down down down to check out my pages.) I think I’m in love with the word “pulpdeckarförfattarinnan.” (Take that, spellcheck!)

The to-do list is rapidly devouring my life. For today: first, make final clothing decisions for Edgar Week and finish packing. Then, after a long day of pre-Edgar girl… Continue

A Last Word on Amazon

The Amazon rank is back up for CONTROL FREAK. I hope this signals the end of the whole sorry mess, but here’s a few final thoughts.

The fact that non-erotic LBGT books were targeted is totally outrageous and unacceptable, but putting aside the issue of which titles actually deserve a naughty label and which don’t, I still find the underlying concept of Amazon’s “adult” labeling system very disturbing. Amazon has publicly admitted that they made a mistake by including all gay and… Continue

Nice write up on HOODTOWN from Bill Crider.

My novel MONEY SHOT has been nominated for an Edgar award. Best Paperback Original.

Thanks to everyone who emailed about the news and congrats to all the other nominees!

I’ve been meaning to post a link to this fab new website paying tribute to prolific pulp legend Emerson LaSalle. LaSalle was author of such unforgettable titles as The Savage Bat People of Planet Danger, Vixen Shamus and Wrath of the Nazi Wolf Men.

I’ve also been meaning to put to rest once and for all the persistent rumor that I slept with Mr. LaSalle shortly before his death two years ago. While I will admit to harboring a bit… Continue Donald Westlake has died from apparent heart failure at age 75.

While I've been a fan of Westlake's pseudonym Richard Stark for some time, I've only just started reading his humorous Dortmunder novels. He was a prolific, versatile genius and will be sorely… Continue 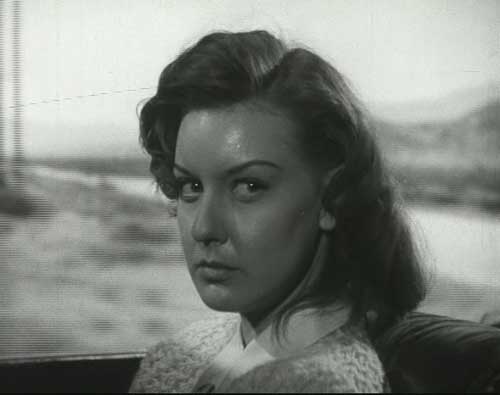 I've foolishly allowed myself to be bitten by the Twitter zombie after all. I'm faustfatale. As per Gerald So's suggestion, I'll be using the site primarily as a link to this blog, with occasional stand alone posts. I'll try to avoid anything dull like: "Christa is writing." That's a given.

Ladies of Noir on Bookslut

Bookslut has posted a roundtable discussion on women and Noir featuring Megan Abbott, Cathi Unsworth and your not-so-humble narrator.

I’ve been resisting the trend of microblogging a la twitter/facebook/myspace/etc for a variety of reasons. First of all, while I may be wildly extroverted in some ways, I’m actually a very private person in many others. I don’t mind sharing my opinions, my writing process and some occasional bits of more personal ephemera with my readers in a structured essay-like form like this. However, I have no desire to share an ongoing play by play broadcast of the daily mundane… Continue 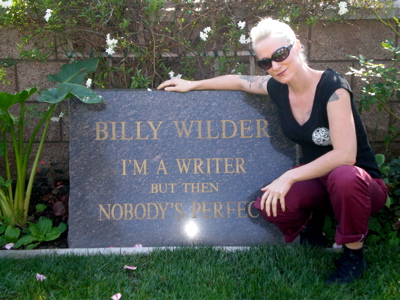 at the grave of writer/director Billy Wilder , author of Sunset Boulevard, Ace in the Hole, Ball of Fire and Some Like It Hot.

At the age of 39, I just voted for the first time. This election is too important to skip. (I know my I Voted sticker is wackbirds in this snap, but I'm sure you get the point anyway.)

I did enjoy my free Krispy Kreme doughnut. I also enjoyed the fact that my local polling place was staffed primarily by hot chubby Latinas with Crayola hair and raccoon eyeliner. I wanted to propose marriage several times, but I figured I'd… Continue

Here’s my schedule for the HARDCORE ANGEL book tour.