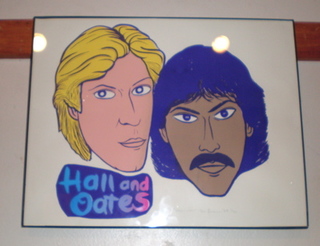 From there it was off to the Noir Ladies Auxiliary panel. Now that’s not entirely fair I know, but I’m with Jenny Siler on the issue of the obligatory “bad girl” panel. Of course there is no equivalent “men’s panel” (since all the other panels are “men’s panels” by default) but hey, Megan Abbott, Vicki Hendricks, Jenny Siler and I did have a great time deconstructing the femme fatale archetype. Also, don’t know why it slipped my mind in the post about day one, but I forgot to mention that we had recorded a podcast on the same topic the night before for Shannon Clute and Richard Edwards’ excellent Behind the Black Mask.

After the femme fatale panel, I got invited to have lunch with Ken Bruen, his agent Lukas and a very dangerous man, known only as Greg. That’s him on the left. But he looks so friendly and innocent, you say. Ha! This nefarious pusher shamelessly lured me into sin by inviting me to visit his used bookstore. And so soon after my paperback bender at the Black Ace book show. Look, I told you I can quit any time…

Well, maybe tomorrow. Come on, tell me you could have resisted this: 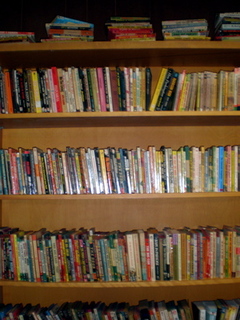 Be still my heart! I wanted to bring a sleeping bag and move in for a few days.

For the drive out to the shop, deep in the heart of Goodisland (don’t worry, I was the designated driver) we were also joined by the other Scott Phillips. (Ice Harvest Scott Phillips, not Stink of Flesh, Perro Dos Mil and That Ass Ain’t Gonna Fuck Itself Scott Phillips.) So while Ken and Greg sat around playing records of old Irish drinking songs and lifting a pint or three, I got happily lost in dusty pulp heaven. I was amazed to discover that Phillips was also a Helen Nielsen fan. We had a wonderful time browsing together and he came out with almost as many books as I did. In addition to the obligatory stack of cheap Shell Scott reading and lending copies, I also scored THE BRASS CUPCAKE by John D. MacDonald, HOT DAY, HOT NIGHT (aka Blind Man With a Pistol) by Chester Himes and an Ace double of THE HUMMING BOX by Harry Whittington and BUILD MY GALLOWS HIGH by Geoffrey Homes (filmed as OUT OF THE PAST with Jane Greer and Robert Mitchum.)

After several worried calls from Lou Boxer (it was his car I was driving) we eventually managed to tear ourselves away and get back to the venue. By then it was nearly six o’clock. Of course, the night was still young and we had no idea what we were in for.