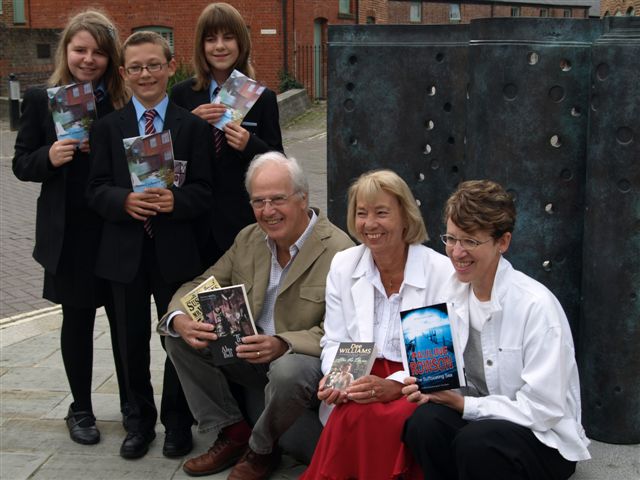 I attended the photo shoot for the publicity for the Havant Literary Festival (Hampshire, UK) this morning with fellow authors, Brian Clarke and saga writer, Dee Williams. ( I'm on the right holding a copy of THE SUFFOCATING SEA.) The children are from Warblington Senior School. The photograph was for The News, Portsmouth's daily newspaper. An article is to appear in Wednesday's edition and hopefully on line.
As part of the festival I'm giving a talk about my crime novels on Saturday 27 September between 10.30am and 12.30pm at Havant Arts Centre. There is a packed programme of events throughout the course of the festival which runs from 25 September to 28 September, with something for everyone and the organisers have worked hard to pull this off - our first local literary festival even though I live in an area where some great writers have lived and worked: Sir Arthur Conan Doyle, Charles Dickens, H. G. Wells to name but a few..http://www.havantlitfest.hampshire.org.uk/

Then it was on to Angel Radio. It seemed to go very well, it must have done because they've asked me back to do a more in depth radio show at a later date. It's a fascinating radio station run by volunteers with an eclectic mix of music ranging from the Big Band sound to Jazz, Nat King Cole and all sorts of music in between including some very old scratched recordings. Whilst I was there someone had requested a very peculiar song, I can't recall the exact name of it but it was something to do with killing a tiger on an elephant! Not very PC and I could be wrong but it was sung with a Yorkshire accent (I think) so if anybody has the faintest idea of the song I'm talking about please let me know.