I dropped into Waterstone's in Newport on the Isle of Wight last week and was delighted to see Paul Armfield, the manager, who showed me the huge display of my crime novels in the store. 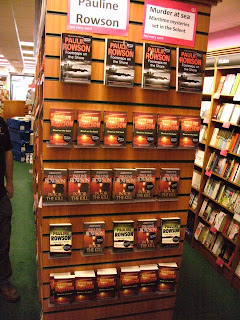 I saw the shelf display at the front of the store under 'Fiction That We Love' and was thrilled with that but then he took me further into the store and there was a complete panel dedicated to some of my crime novels and thrillers, including hard cover copies of the latest in the series featuring my flawed and rugged DI Andy Horton, Footsteps on the Shore which has had a fantastic starred review in the USA by Booklist.

Along with this were copies of Dead Man's Wharf, ( no.4 - which was given a starred review by Kirkus) and Blood on the Sand (No 5.) which is set on the Isle of Wight. My thrillers were also there, In Cold Daylight and In For the Kill which is also set on the Island.

I signed some copies while I was in the store and hope to return to Waterstone's to give a talk and book signing in September on the launch of the paperback of Footsteps on the Shore.