Presenting prizes and certificates to the Crime and Intrigue Short Story Competition winners on the Isle of Wight, UK

On Monday 20 June I was privileged to present the prizes to the winners of the Crime and Intrigue Short Story Competition organised by the Wight Fair Writers Circle. 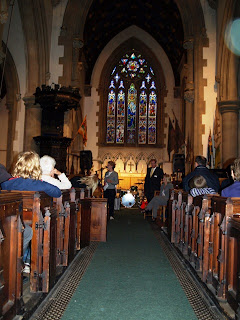 It was held in Newport Minster with the High Sheriff of the Isle of Wight, Susie Sheldon present. It's great to see so many young people enjoying writing. I didn't judge this competition or get to read the winning entries but the titles of some of the stories were fantastic, one was called 'My Daddy's a Criminal' - hope he isn't!

The police set up a Scene of Crime and the audience were able to have their fingerprint taken and pressed into a badge, much like we did at the Portsmouth CSI event last year, only then the fingerprint was pressed into a key ring. So now I have a key ring with my thumbprint and a badge with my fingerprint.

It was a lovely evening and many thanks to fellow crime writers Bob and Carol Bridgestock for making it so successful and to the Wight Fair Writers Circle.The competition winners and details of further competitions will be announced on their web site.

The competition raised money for the Isle of Wight Homeless and the Love Russia charities.  It is running again next year thanks to the generous sponsorship of many local businesses and to an anonymous benefactor.  I'd also like to thank Wightlink for sponsoring my trip to the Isle of Wight.

I had a lovely time, thanks for inviting me.