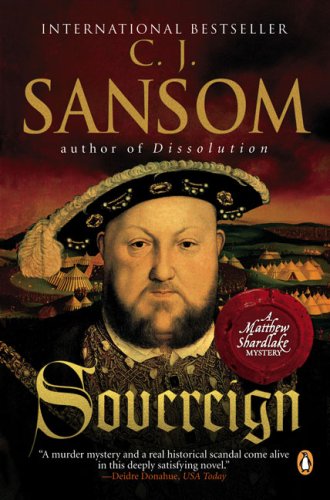 In the spring of 1541, Henry VIII faced another conspiracy in the north of England, whose people and nobles were still largely opposed to the 'new religion' and still loyal to Rome. While the conspiracy was uncovered and many of its leaders imprisoned and executed, Henry and his advisers hurriedly organized a grand Progress,setting out to York in July to consolidate his authority. This forms the backdrop to the third of C. J. Sansom's Matthrew Shardlake mysteries, SOVEREIGN.

The hump-backed barrister of Lincoln's Inn, London, is called before Archbishop Cranmer and given a commission to assist at York in bringing petitions for justice from the people to the king. In addition, Cranmer gives him a charge to see to the safety of a noble prisoner, one of the spring conspirators, who is being brought back from York to London to endure the ministrations of the expert torturers in the Tower. The book opens as Shardlake and his assistant, Jack Barak, once a top operative for the now deposed and executed Lord Thomas Cromwell, ride into York a few days ahead of the King's Progress. What follows is a story that has all the period detail, suspense, danger, and political intrigue one could expect in the tumultuous times of Henry's England. A suspicious death, cryptic dying words, a cask of secret documents, repeated attempts on Shardlake's life - to say nothing of his current legal quarrel with a powerful foe, Sir Richard Rich, of the King's Privy Council - plunge the lawyer into events larger than he can realize, even to the tragedy of the ultimate fate of Queen Catherine Howard.

Readers of the first two books in this series, DISSOLUTION and DARK FIRE, will have come to expect a sense of authenticity in Sansom's portrayal of the highly-charged and dangerous atmosphere of early reformation England, and they won't be disappointed. Sansom has a gift for making the characters and time live before our eyes, all but placing us on the ground there. Those who haven't read Sansom before are in for a treat.