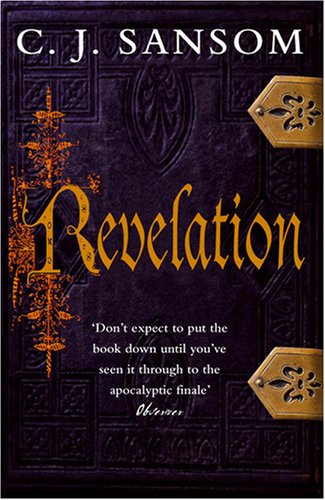 REVELATION is the fourth of C. J. Sansom's masterful stories about Matthew Shardlake, a hunchbacked barrister of Lincoln's Inn, London, during the time of Henry VIII's reign, specifically the boisterous decade of Henry's break with the Church of Rome. It is during these years of religious upheaval, driven by political intrigue, that Shardlake, once a radical reformer in the service of Thomas Cromwell, finds himself engaged in investigations, commissioned first by Cromwell, then, after his execution, by Archbishop Cranmer, that seem always to have political overtones that endanger Shardlake himself. After three volumes of this in DISSOLUTION, DARK FIRE, and SOVEREIGN, Shardlake wants nothing more than to eschew the treacherous playground of politics and quietly resume his practice of law at Lincoln's Inn.

It is not to be, however; an old friend and fellow barrister, Roger Elliard is found horrifically murdered. When Shardlake makes the promise to his widow that he will not rest until the killer is found, he is assuming the duty of a friend, but when he is summoned to Archbishop Cranmer's palace, he soon realizes that Roger's murder was more than personal. Baffled by the King's Assistant Coroner's handling of the inquest, Shardlake is summoned to the Archbishop's palace, where he learns that his friend's murder may have a connection to others, and may, indeed, have some connection to Lady Catherine Parr, on whom England's amorous king has set his sights. That all this is being hidden by Cranmer and his ally, Edward Seymour, from the King once again places Matthew in a precarious position. In searching for the killer he will have to deal with evils he has not before seen, rumors of demonic possession, and ponder the cryptic plagues recounted in the apocalyptic Book of Revelation.

This book takes the modern serial-killer motif and adapts it to a time when madness was most often assumed to be possession by evil spirits, and does so with a remarkable lack of anachronism. Shardlake, Barak, the former monk and physician, Guy, all these are portrayed as men of the times, yet men willing to look beyond the contemporary belief to see truth. I was, as always, greatly impressed with Sansom's portrayal of Tudor England, and more than happy with the page-turning plot. Perhaps the best book of the series, so far, was SOVEREIGN, the book immediately preceding this; but REVELATION is by no means a disappointment. You will be well-rewarded in reading it.