There’s a lot going on in Crime Writing Month organised by the Crime Writers' Association (CWA) with my fellow crime writers giving talks, book signings and workshops around the country. The Crime Writing Month website also features some of the hottest new crime fiction publications of the summer including A Killing Coastfeaturing the rugged, hunky and flawed DI Horton. 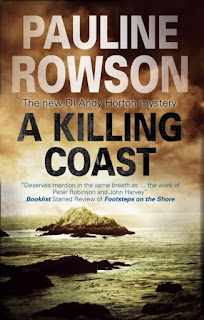 Set in the Solent area on the South Coast of England this is the sixth in the series and was published  this year.
“Readers will be rewarded with a surprising conclusion and a satisfying read.” Booklist
When a body is found floating in the sea off Portsmouth harbour, Detective Inspector Horton initially judges it to be an accidental death. Soon though, to his dismay, he discovers he’s got it very wrong. Accused of being incompetent by his boss, and with the head of the Major Crime Team coming down heavily on him, Horton wonders if he’s allowed his ongoing investigation into the disappearance of his mother over thirty years ago to cloud his judgement. With no clear motive for the murder, Horton is sucked into a baffling investigation that he is determined to resolve despite the odds. Not only does he need to find a brutal killer, but Horton now has to prove to himself, and others, that he is still up to the job.
If you enjoy reading crime fiction then check out the list of crime novels at http://www.crimewritingmonth.co.uk/2012/booklist.php
There is also a list of events taking place during Crime Writing Month.
http://www.crimewritingmonth.co.uk/2012/index.php