So, I got these two kittens a few months back. Ragamuffin is a torty; Rusty is orange and fluffy. They were rescued from a stray cat's litter.

I'm trying hard not to be an over-protective mother. When Rusty, the clueless male, climbed up to the top of the tree, I had the crazy idea to send his much more sensible sister to fetch him down. She obeyed and went to the rescue like a St. Bernard.

Which left me to wonder: when did I…

NOIR AT THE BAR (San Diego)

San Diego Noir at the Bar

Up today in Kings River Life a review of Andrew MacRae's first mystery novel "Murder Misdirected", an interview with Andrew & a chance to win a copy of the book http://kingsriverlife.com/01/19/murder-misdirected-by-andrew-macrae/ 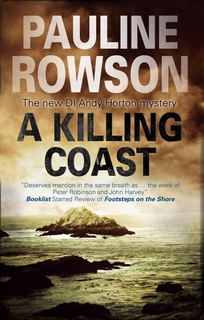 The Next Big Thing, Part 2

I was asked to participate in another of The Next Big Thing. I was recently involved but thought it would be a good opportunity to help promote one of my works in progress. Unfortunately, I am unable to tag other authors, but if anybody would like a future tag or to be highlighted in…

His name isn't Furt Bent, and he isn't from Aldaheit. He's the persona that Osgood Sneddon invented for himself to rise above the mundane, and extricate himself from trouble when a moment's misunderstanding lands him on the wrong side of the law.…

Praise for The Troubleshooter

Thankye posted this review of The Troubleshooter on Amazon: “Great character, this Hannibal Jones. Look forward to reading more. Good guys vs bad guys, I thought it was well written.”…

1929: Girls are going missing in Melbourne. Little, pretty golden-haired girls. And not just pretty. Three of them are pregnant, poor girls from the harsh confines of the Magdalene Laundry. People are getting nervous. Polly Kettle, a pushy,…

When Kim Philby fled to Moscow in 1963, he became the most notorious double agent in the history of espionage. Recruited into His Majesty's Secret Intelligence Service at the beginning of World War II, he rose rapidly in the ranks to become the…

Should corporate annual posts be thrillers?

I used to quite like writing the annual Business Plan for our family company, Genesis Homes Ltd. It took a creative use of words to put the proper spin on things like market conditions, competition, and the world economic crisis. It was uplifting to review where we’d been and where we were going as a corporation. It was rewarding to look back on the hardships we’d overcome and make definitive plans to meet the challenges of the future.…

Up in Kings River Life this morning we have a review of Nancy G. West's latest mystery "Dang Near Dead", a fun guest post from Nancy where she interviews her main character & a chance to win a copy of not only this book but the one before it http://kingsriverlife.com/01/12/dang-near-dead-by-nancy-g-west/

Also up in KRL this morning, a review of Jim & Joyce Lavene's latest supernatural…

Two of my novels - The Orion Assignment and Damaged Goods are now on sale for 99 cents!

Gail Alexander posted this on Amazon about The Troubleshooter: “After having read a later book in third series, I decided to find where Hannibal started. I like his style! Camacho writes well without bells and whistles. The action is fast-paced and at times more than a little breathtaking. I'll be reading more of Jones's adventures!”…

Unexpected Activities - Zach O'Malley of An Adventure in Indianapolis

He knows he is not the only O'Malley, but Zacheria is content.  He delighted his parents by making it clear he planned on growing up to become a priest - a nice Catholic priest.  His parents were pleased.

When he was a teenager, the girls were disappointed.  He was friendly and kind and attractive.  As long as they wanted him to behave like a gentleman it was nice, but when push came to shove and they wanted romance it became negative.  Zach was not the only person to have that type… Harken back to those early years of learning cursive. Why did we learn it? Why was it invented in the first place? You have basic block letters and printing is just as good and even better in some cases for legibility.

Cursive was invented, in part, to save pens. See way back when humans used…

Readers Have Spoken Loud and Clear – Top Blog Posts of 2012 Thank you to everyone who has visited and subscribed to my blog  – it doesn’t go unappreciated.  When I first decided to create a blog, I was apprehensive at first.  Well let’s get serious, I was terrified.  I thought I’d be writing articles just for myself and no one would care about the posts I wrote, but I was…

DNA under Fingernails Lead to Arrest in Decades-Old Cold Case

Every week seems to bring a new story of how advances in forensic technology are bringing closure to cold cases that had been held in police files without leads for ten years, twenty years, or longer.  The scientific community and law enforcement are working together to bring closure to families who just a few years ago may have thought the ability…

Crime fiction, film and television are extremely popular among readers and viewers worldwide.  Fiction writers are often categorized, listed and known for their particular genre; be it crime, mystery, romance, horror, science fiction and so on.  Genre is defined by Merriam-Webster as a category of artistic, musical, or literary composition characterized by a particular style, form, or content.  And as stated by Joyce Carol Oates in The New York Review of Books, “In…

Tales of Tomasewski by Del Staecker

Would you like to know what makes a good detective?  Well, I think it’s the same qualities that make a good anything.  Doing what you have to do, even when you don’t really feel like doing it.

Like going out and risking you rear end when you just know that you’re not going to get any credit or thanks for it.  Like solving cases that no one else wants any part of. You…

A Question of Identity - Susan Hill