Today is the last chance to enter for a chance to win a copy of Penny Warner's latest mystery http://kingsriverlife.com/12/11/interview-penny-warner-review/
Don't miss out
Lorie Ham

The notable crime stories of 2010 include foreign and American-born terrorists, collegiate and professional athletes, a college professor, the disturbing and ever-increasing problem of bullying, and the satisfying arrest of the man long suspected of having committed a similar murder. I’ve limited my selections to those crimes that actually occurred in 2010, but as always, there are far more notable crimes than there is space to list them.

Felt like I was in Brigadoon on Tuesday night, but without the kilts, the singing and the dancing

On Tuesday night I went to Brigadoon.  OK, not really but it felt like it. I gave a talk to the Women's Institute in the small picturesque Wiltshire village of Broad Chalke.  It had a kind of lost village feel about it tucked away down a narrow winding English country lane that gave me a sense of being in Brigadoon, (for those not familiar with it Brigadoon is a film about a lost village in Scotland which only appears once in every hundred years for one day, starring Gene Kelly, Van Johnson…

Around the Globe with JENNIFER WYLIE

This week I have a pleasant interview with author/editor Jennifer Wylie. She wanted to go to someplace tropical, so I hopped in my transporter, picked her up at her house out in the country in snowy Ontario, and while her kids were off at a babysitter, whisked her off to Antigua where we lounged on the beach. While she sipped a strawberry daiquiri and I slurped milk directly from the coconut I asked her the ten standard questions.

1.Who is Jennifer Wylie and what makes you the…

Get a signed mystery novel this weekend!

Hanging in the Mall this weekend?  Me too!

My final book signing of the year in Virginia is at Borders in Dulles Town Center this Saturday.  I love this little store because it came back from the dead!  I did a signing just before it was shut down by the Borders chain last year.  Then the community made them bring it back.  Meet me there between 1pm and 5pm, at 21100 Dulles Town Circle, Dulles, VA

WHY I'M NOT WRITING

I'm very adamant on the Internet and elsewhere that I don't believe in the notorious “writers block.” Most former journalists and newspaper people will agree with me. We couldn't couldn't look up at the editor in despair and whine, “I don't know, sir. The words just aren't coming to me right now.” That doesn't fly when there are column inches to fill and lay-out people impatiently tapping their…

Mary Jane Clark To Have and To Kill

To Have and To Kill is the first novel in  a new series for Mary Jane Clark. I haven’t had the pleasure of reading one of her novels before so this was a first of firsts for me, I enjoyed it. Clark definitely drew me in right away. Here is what this novel is about:

“My new character, Piper Donovan, is a struggling actress with no immediate prospects and a recently broken engagement. Reluctantly, she moves back in with her parents to take stock of her life. Piper steps…

Back in the day I used to read all of Joseph Wambaugh’s novels: The New Centurions, The Blue Night, The Choirboys, The Black Marble, The Glitter Dome, The Onion Field (non-fiction). It seems I have missed nine novels since and four non-fiction books. I am not going to list them; you can see them on the inside of the novel, Hollywood Hills when you crack it open. Let’s get into the action shall we?

“The legendary Hollywood Hills are home to wealth, fame, and…

Raymond Chandler once described an activity (not important what) as being “as elaborate a waste of human intelligence as you can find outside an advertising agency.” I have happened upon a dark corporate art still more wasteful and, being a writer, I see how it’s related to the plotting of a novel.
I’ve had a couple of mild run-ins with corporate complaints departments of…

'This is a fast-moving, skilfully-written tale, told with lots of humour, plenty of twists and turns and a convincing ending. The author, who has a well-deserved reputation for clever crime fiction that keeps the reader guessing until the end, will certainly not disappoint her ever-increasing number of fans with her latest novel. I recommend it very highly.’ Mystery Women on Death Dance

I met Terry Chase at a book signing at BWI airport, where I signed a copy of The Troubleshooter.  She sent me a complimentary email asking if she could get the rest of my books at … 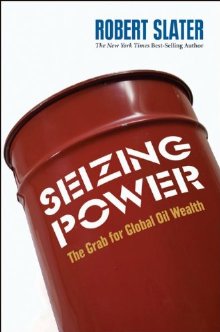 Seizing Power: The Grab for Global Oil Wealth by Robert Slater (Bloomberg Press, $29.95)
Just when Goldman Sachs had you convinced that Wall Street would be the instrument of global doom, this excellent primer on the future of oil arrives to demonstrate that the specter of diminishing crude reserves could be just as lethal. And not just to the world…

The Case of the Missing Glove

I've met with unexpected success with ebooks. The new technology seems to have brought me a new wave of fans. It reminds me that we should never be afraid to try something new. Remember that a lone amateur built the Ark. A large group of professionals built the Titanic.

Excellent Puzzle. one of your best.

I’m thrilled with the reaction to A CANTERBURY CRIME. ‘The story is totally unpredictable and never loses the reader's rapt attention. Brenda and Hazel are witty, irksome, sharp, and pleasure-loving characters who are the perfect detectives, barely managing to elude disaster by the most dire, unsavory criminals imaginable!’ More splendid reviews on this link,…

Are you of the "bah humbug" frame of mind; all fed up with tinsel, shopping, and "ho, ho, ho"?

Or are you into the season, cuddled up by the fire with a cup of steaming cocoa and watching It's A Wonderful Life?

I'm more of the latter persuasion. Although living in Florida for most of my life, I enjoy a brisk north wind and the crisp autumn-like feel of our winter weather. Attended an outdoor party a couple…

﻿Borders in the in the Gateway Center was a great host Saturday. Withlive brass playing holiday music and a cheerful crowd my book signingwas a near sellout. Then I signed a few books at Borders in DullesAirport. Not big sales but I did make a couple new British fans and acharming gentleman from Kenya.

In other news, Amazon.com introduced Kindle book gifting. Now you cangive any Kindle book available as a gift to anyone with an e-mailaddress. You don't need a Kindle to send or…

When I put in the time to read a book, I find that I can really only get to the end of it if I’ve fallen in love, to some degree, with the characters, the plot, or both. There is the rare occasion where I will finish the book - or want to finish the book - simply because I’ve invested so much into it, but those instances are few and far between. The characters are usually the ones who carry me through because most of what I write is centered around character development, so it’s only natural…

I consider those legitimate glances. Anyone, in the right…